This post is long and has been a long road for me but here it is. Car sat after a disastrous 2010 that left me disheartened and broke after years of mods and bs with shops. I got the car back on the road in early 2019 (started off with bs with a mechanic and I changed my whole way after this, only top tier shops) with a donor engine and a ton of restoration mods and lost the head gaskets in 2020. I planned out this path after I got an engine from my buddy Rick L (thanks for the help dude).

It's finally dyno'd and is exactly what I hoped for. If you're looking for a street killer that can keep up with these new cars and future electrics, this turbo and combo makes sick torque and is super fast spooling like a big block NA. Easy choice if you only care about power throughout the WHOLE rpm range = G30-770. Not so great if you care about money and customizing PIA stuff. LOL
My other thread on this turbo will give you those install and parts details. I have every part and can give you info if needed.

Mustang Dyno
Blackdog Speed, Lincolnshire IL
Gordon is the tech on my GN with help from Jeff.
Steve D tunes the ECUGN (board name is Beatav8)

Mustang Dyno results at the bottom and comparison dyno graph included. I don't know a ton about dynos but the low end torque difference seems way to good to be true. I actually didn't believe the graphs until it did it every pull. It doesn't mean this is a real torque number but even if it's 15% juiced from things I'm not aware of, it's great. I say this because the torque is so high I can't believe it.

Then this Supra video link at the bottom made me realize an issue we're all facing with these 3 bolt. 63 housings. This is partially why I'm cool with posting an this, these v band in and out housings with the newest wheel designs are just not fair, let's evolve and keep destroying these V8 twin turbo Mercedes at $120k with 1 tiny turbo like in 1987. LOL

Here's the skinny..
I'm a GN lifer (justified the $ LOL), I am 99% street and want the quickest to 80mph car possible. G30-770 isn't a cheap upgrade considering everything involved. I planned out everything with buying parts and making lists with labor help from the guys at Blackdog Speed. I am usually pretty private about these endeavors because of the time and huge $ involved but since we're a dying breed, here's some info to keep us all ready for these V8 supercharged/turbo cars and future electric killers. If you need any info I have it in an F load of receipts.

Test Similarities
I tried to keep everything the same so the results were as comparible as possible. I was skeptical too that these import online cars were really making 700whp with this small turbo. For us it's not high end HP, it's low and mid range torque, well it's for real.

Same shop, Mustang Dyno, driver and Tuner.
Same spark plugs and same E77 from gas station. No go fast parts added between turbo swaps and its as back to back as I could keep it within my knowledge etc.

TA49 was maxed boost wise, we couldn't add more and the timing was conservative at 18 degrees. It's a new motor and honestly I've had a crazy 10 years with this car so we're keeping it safe for a while. There was some power left in the TA49 if we went to say 22 degrees but the G30 has some boost left and a lot of timing so it's not even close.

Both on a the same newly rebuilt engine, about 600 miles added from TA49 dyno run for the G30-770 pulls. NO new go fast parts added to be clear again.

Car makes way more low and mid range torque, so much I didn't want to push the engine that much harder low and mid range. Turbo has some boost left in it and made WAY more power on less timing. Spools a little faster and pulls way harder, 4 generations of turbos later, it's pretty clear these small turbos are street killers for us to still be the street king. If my TA49 GN pulled up vs my G30-770 GN it would get destroyed in every way. Same turbo wheel size mind you, this turbo spools better than a TA49 making the power of a 6266.

There's a great video on how the exhaust housing affects power on these bigger V6 engines vs what usually happens on a 4 cylinder (slower spool and loss of low end torque). This Supra video made clear even the better Garrett .63 v band inlet housing on the G30-770 spooled later, made way less power throughout and was a disaster on a bigger engine vs the .83 and 1.01. Our engine showed the same thing, this info is relevant, the smaller inefficient housing kills power throughout the range. My graph is worse than the Supra video, I'm happy with my choice.

I think...
The v band housing swap was a big factor why our engine showed a giant low and mid range GAIN vs the 3 bolt .63, cubes and good heads need a better flowing exhaust housing and flow asap in the power band. The bigger .83 v band was NOT spooling later and making less down low like we've seen/heard before, it's literally the opposite. The bigger, better v band design and modern wheel is unleashing or engines main advantage, torque.

The Garrett v band 1.01 would spool 300rpm later than my .83 but pick up throughout the shift range if you're curious. Check out this video below.


I'm no expert but it seemed to of paid off in my combo, big time. Maybe others will take this and make it easier and cheaper for us to swap over too and the data will be seen on other cars and repeatable.

25 years later, 1 more visit to the body shop next week and it's finally done. (Ya right)

Very interesting. What ecu are you using?

Timing added up top will most likely be the only power addition for now after we check the plugs during another dyno session doing pulls. Easy to do in ECUGN along with adding boost via the solenoid.

Almost 900 lb-ft in a street car? That must be insane. 900 vs 600 tq is crazy. Can’t beat technology. Just keeps getting better and better

WOW, I'm thoroughly impressed with that new Turbo!
Congratulations on taking the chance and getting massively rewarded for it!!
How does it feel on the street versus the TA49 setup?
ENJOY!!!
- Jerry

It's probably more like low 800s tq but because it comes in so fast its a bit much even with all my rear suspension mods. I'll need to bribe Mr.Spool to give me a couple street hooking tips so it'll actuality use the torque.

Thanks for sharing, cool stuff.
M

GNVYUS 1 said:
It's probably more like low 800s tq but because it comes in so fast its a bit much even with all my rear suspension mods. I'll need to bribe Mr.Spool to give me a couple street hooking tips so it'll actuality use the torque.

If you want to hook it on the "street"
PM me and we can chat.
M

im curious on the build, heads etc on your car....super interested, thoughts on the g35 version....
H

Their 68mm looks like it do 100+lbs/min.
I know comp and pte will do that and more on the 68mm.
It's a good time to have a turbo car for sure.
Power management and chassis knowledge for the air these turbos move is the key

torque is through the roof
M

Definitely looks like the highest rated 58mm turbo out there now

Are talking about this turbo? Looks interesting. Does that .85 exhaust housing hurt the spooling? 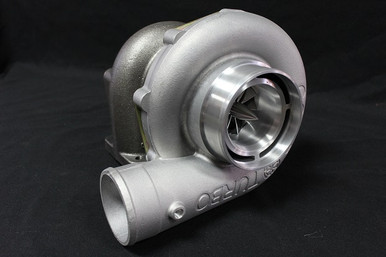 www.gn1performance.com
From the Comp website the exhaust housing are all 4 bolt so I assume the one from gn1 is a combo of some other exhaust housing.
Last edited: Sep 29, 2022
M

Pronto said:
Are talking about this turbo? Looks interesting. Does that .85 exhaust housing hurt the spooling?

www.gn1performance.com
From the Comp website the exhaust housing are all 4 bolt so I assume the one from gn1 is a combo of some other exhaust housing.
Click to expand...

Yes
Not with the triple bb

Pronto said:
Are talking about this turbo? Looks interesting. Does that .85 exhaust housing hurt the spooling?

www.gn1performance.com
From the Comp website the exhaust housing are all 4 bolt so I assume the one from gn1 is a combo of some other exhaust housing.
Click to expand...

They will do 3 bolt as well
But with their stuff I would go right to the .85
M

Just to clarify on the right combo with getting a turbo that can utilize the .85 3bolt flow
H

Mr.Spool said:
Their 68mm looks like it do 100+lbs/min.
I know comp and pte will do that and more on the 68mm.
It's a good time to have a turbo car for sure.
Power management and chassis knowledge for the air these turbos move is the key

Staff member
You should have done an apples to apples comparison. This really proves nothing. You could have lowered the timing in the TA49 and turned the boost up more. You also had different AR housings which also makes a huge difference. Boost always makes more power than timing.

Im sure the newer turbo is better but your testing methods have really skewed the numbers.
You must log in or register to reply here.