@turbobuick will the compressor cover on the 6466 clear the nipple on the water pump without trimming? The G30/G35 with a T4 is a no-go because there is no sensible way to run a return line. I have a BW EFR 9174 I can put on but even with the SX-E cover I need to cut the water pump nipple (and make water lines) It is probably be a bit too big so going to a oil cooled 6466 would be simpler.

Staff member
I would think so its physically a pretty compact turbo, I am still trying to get past how small the turbine housing is. My 6768 dosent spool bad but this thing should really zip. I would still like enough steam to make 700 at the tire when turned up and Mike assures me it will do that easily. Here it is next the the Bullseye mid-frame NLX88 I am putting on my GN which is actually a fairly compact turbo for what it is too. 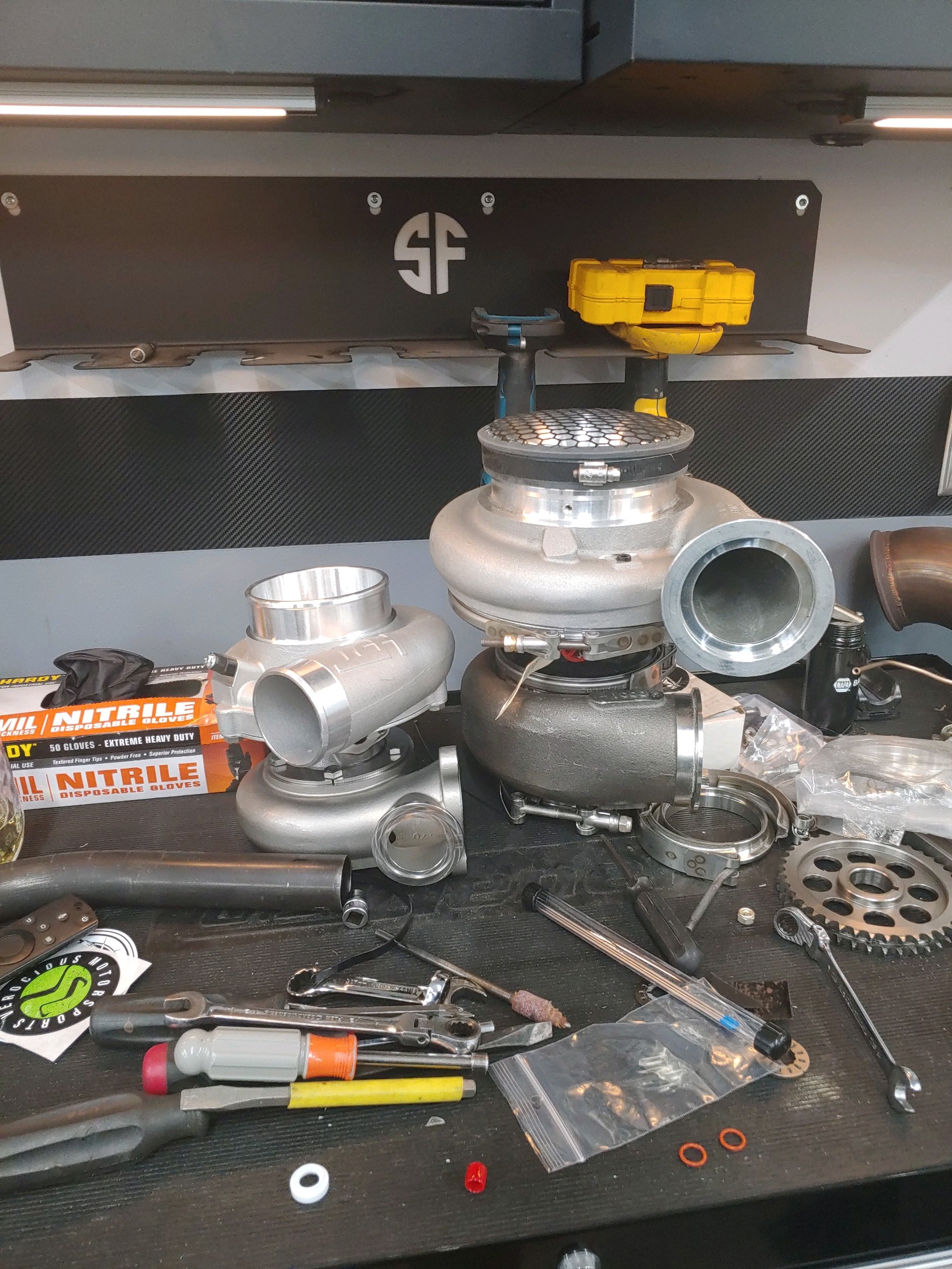 I may try putting it on this weekend. I have been full steam ahead on my other project but have a small drag-n-drive event I am supposed to be at next Thurs-Sun down South which we plan to take the Ttype. I haven't decided if I am putting it on this weekend or waiting till I get back. I have to fab something for the WG to clear the SLIC or I can put a FMIC I have sitting here, just haven't decided yet.

Staff member
I thought I would post an update about the drag-n-drive event we did in SC this past weekend. We had a lot of fun and that is by far the most time I have spent in a Turbo Buick in at least the last 10 years lol!

I am building my GN to do Drag-N-Drive events and decided to sign up for the SE Street-N-Yeet event for the experience and as a test run for the trailer. I figured it would be a cake walk for the Ttype since it is a pretty much stock car with all its factory options still in operation. Forget the fact that it really has never been driven in the rain, is 36 years old and up till this year sees less than 200 miles a year!

The event started off rough with the weather. Hurricane Nicole hit Florida Thursday morning the day the event was scheduled to start. They figured we could get Thursday's event at Shadyside Dragway off before the rain which was supposed to start around 4pm but got there shortly after noon and didnt stop till Saturday!

My wipers made 3 passes and stopped working. So I called Advanced Auto and they had a replacement which we installed in the parking lot in the rain. It made it 4 passes before it died and we drove the rest of the 120 miles that day on Rain X!

Day 1 Check points, I let Ray take the first pic and that would be the last pic Ray took lol! He missed the actual check point in the background and cut off half the car IMO it had to take effort to take such a bad picture! He was zonked out by the time we reached the second check point lol!

Friday was a total wash out and it was canceled before we left. It was supposed to be at Union County Dragway. We still had to make the check points and I was able to get a replacement wiper motor which did work, most of the time! They hosted us at the one stop with pizza and a contest with a timing tree. Few pics of cars rolling in.

From Union we drove all the way down to Aiken SC and were supposed to race at House of Hook on Saturday but they ended up canceling on us due to not being able to dry the track in time. The organizers were able to get us switched back to Union County and had to be there by noon the following day. They also dropped one of the check points as a result of changing the route. At the end of the day the brake light started coming on and going off by the time we went to dinner that evening it came on stayed on and lost power assist on the brakes altogether. We figured it was the swtich and woudl deal with it in the morning. I woke up at 2am realizing we had no brakes were 180 miles from the truck and I was not going to find a powermaster brake switch in Aiken SC!! While Ray sucks at taking pictures he is a pretty good wrench and figured out how to jump the switch to get the PM to work. We figured we would be able to drive a few miles and then stop to re-jump the switch but we made it all 120 miles to Union County Dragway without the brake light coming on. It was a pretty nice drive without the rain!

I did make 3 hits on the car at Union, I needed to turn in two time slips and the first pass the car was popping and farting as the plugs were fouled due to all the street driving. I ended up running it on spring pressure without the boost controller since it would spike really bad. I tightened the rod some and got 21psi and I couldnt hook the car for shit.

Last day made it back to Shadyside. We had a 9 hour tow home and both Ray and I had to work on Monday so I made two passes ASAP and got on the road home. I would have loved to stick around and run the car more the track was working and the air was awesome. First pass I got a 7.21 on the first pass with the car farting again cleaning out the plugs. I need to go to a hotter plug. I did put a few more turns on the Wg rod and got up to 24psi. Last pass was a solid 60' with a 1.69 but tires came loose about 80 feet out. A quick shock adjustment could've fixed that but we had to go. It did go its fastest 1/8 mph at 103 so it would have deep in the 6's with that 60' we had. 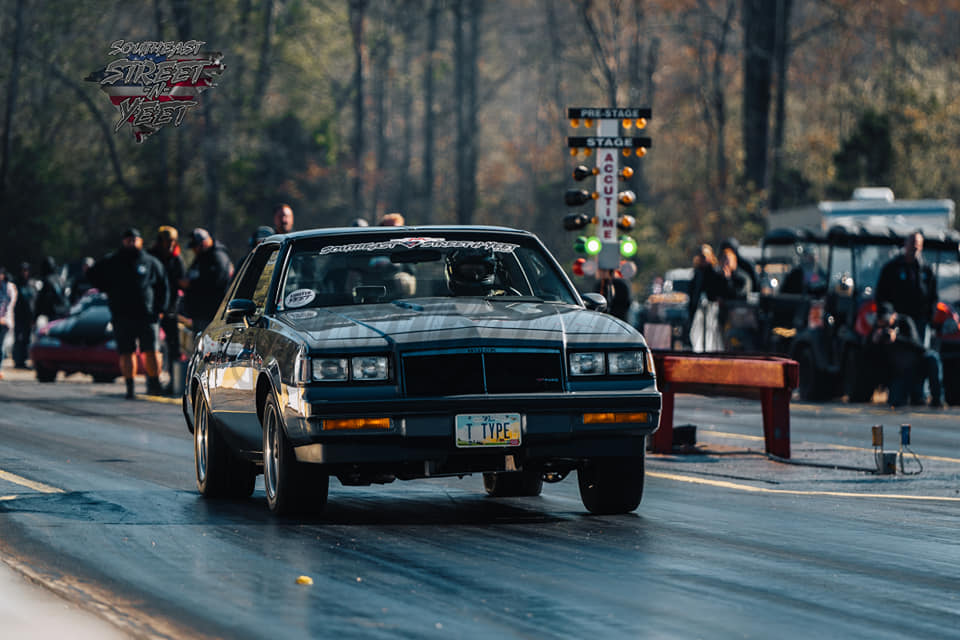 In all we drove the Ttype 700 miles and had an absolute blast despite the waether. I have a new found respect for the guys who do this with really fast cars and will be re-thinking a few things on my GN build. We are signed up for Sick Week in Feb with the GN but it will be a stretch to get the car done in time.

Sweetness!
You must log in or register to reply here.