Nearly 40 years ago I ordered this Buick Regal (a 1980), with every option available in 79'. The car came / and was ordered in a "Somerset Package", and I drove it for about 6 years ... zooming ahead:, later I would become discouraged with the car, why ?: because (back at that time), I had the usual enamel paint issue's where the finish would eventually start to fade, shadow, and THEN it started to crack and come off all-together, (mainly with the upper-side blue color . SO: while the car was still under warranty, I had the upper blue (again: the car came in the two-tone "Somerset" Package) all redone.

After that I parked the car, and never drove it again ...

As one can imagine: repainting anything (back at that time) in "enamel" ... didn't last "long". Later: the stripes never really fully covered-up the paint "break lines", and after that, the stripes (about 8 years later), FOR those very paint-lines were THEN unavailable. ALL the Somersets we saw at the Dealership were this way, and LATER they ALL eventually "faded-away" / gone.

Pushing the years forward: THEN the Regal "T Types" and "Grand National's" came ta be ...*I can't tell you how in "want" I was for one !, *but alas: "I couldn't afford one. Here's when I decided ta "go for broke" / and decided to work WITH what I had: I striped the entire car down (pulled the hood, trunk, fenders, doors, EVERYTHING and striped her with "Aircraft Stripper". *(I upgraded the hood with the "Turbo-Hood" as well). I sent set-out in doing MY "imaginary 80' T-Type", or DID what the car (too me), WOULD HAVE BEEN LIKE. I also decided to sand-blast, and "blacked-out" ALL her chrome (later: this would come back to haunt me), and I drove it for another two years, AFTER THAT: put her away and never drove it again.

Well: after 24 years in storage I decided to get the car back out, "DID", then looked at it: and something I never expected happened: I HATED the blacked-out moldings !. Then came my usual "full-assault mode" on the project *(having just done 4 others EXACTLY like this one). There really was no real "issue" except that of the moldings themselves, I lightly sandblasted them, and after that: had the Body Shop spray an "adherer", so that my paint would "bond-well" ... "IT WORKED" ...

SO: I rubbed, polished and did / used all I could in trying to remedy my "error" all those years ago, then I decided to have them professionally polished.

"ENOUGH": so I went there too collect them, but i could NOT ! . Asking why I never really got a solid answer ... anyway: "I NEVER DID" / now they're gone. *(A looooooooooong, loooong, long story). Luckily: having done so many of these, *(and with the value of "Craigslist"), I was able to find 90 % of my stuff, which soon changed to 100 % a short time after.

SO: HERE is my fantasy "wanna-be, would have been, could have been, "should have been" ? car. I like the white now, and it still drives like new with it's W-4 301 Pontiac Cubic Inch Engine. I figured why sell her for peanuts ? It's STILL a nice car, and it drives like a dream ... I actually insured it this summer, and before I put it away again (likely for good this time), I'd thought I'd share it / this "story" HERE.

Very nice car. These cars ride so smooth and quiet. I drove a Cutlass 100 miles a day round trip and it was relaxing to drive plus I got 24 MPG with the V6.

Nice car. I like the Somerset's, but I understand the repaint. It looks to have the right balance of white, black and chrome.


Drive it and drive it often.

Thanks to both of you ... In the above, (and in this thread's 'start'), I was interrupted several times / and screwed some "finality-lines" up. ... ANYWAY: The promised "FINISH-TIME" to polish my moldings was one (1) MONTH.

1 year (and a week) later , was the line in the sand that I drew, (in my trying to get them back). *Each month I went in to check on their progress / impress upon him I was in a hurry to GET them BACK ...

After that: the interesting fact that the car came with two matching umbrella's (to match the interior), all Somerset's came this way (with one umbrella), but I suppose my having loaded this unit up, "warrantied two" ... one behind / in each seat, (in a pocket).

And the final thought: I was going to change the interior over to a console shifter / design, (amid installing two BUCKET Seats to replace the 60/40's that the car came with) ... "but: I chickened out, as the seats that were installed already (the 60/40's), were very comfortable already". 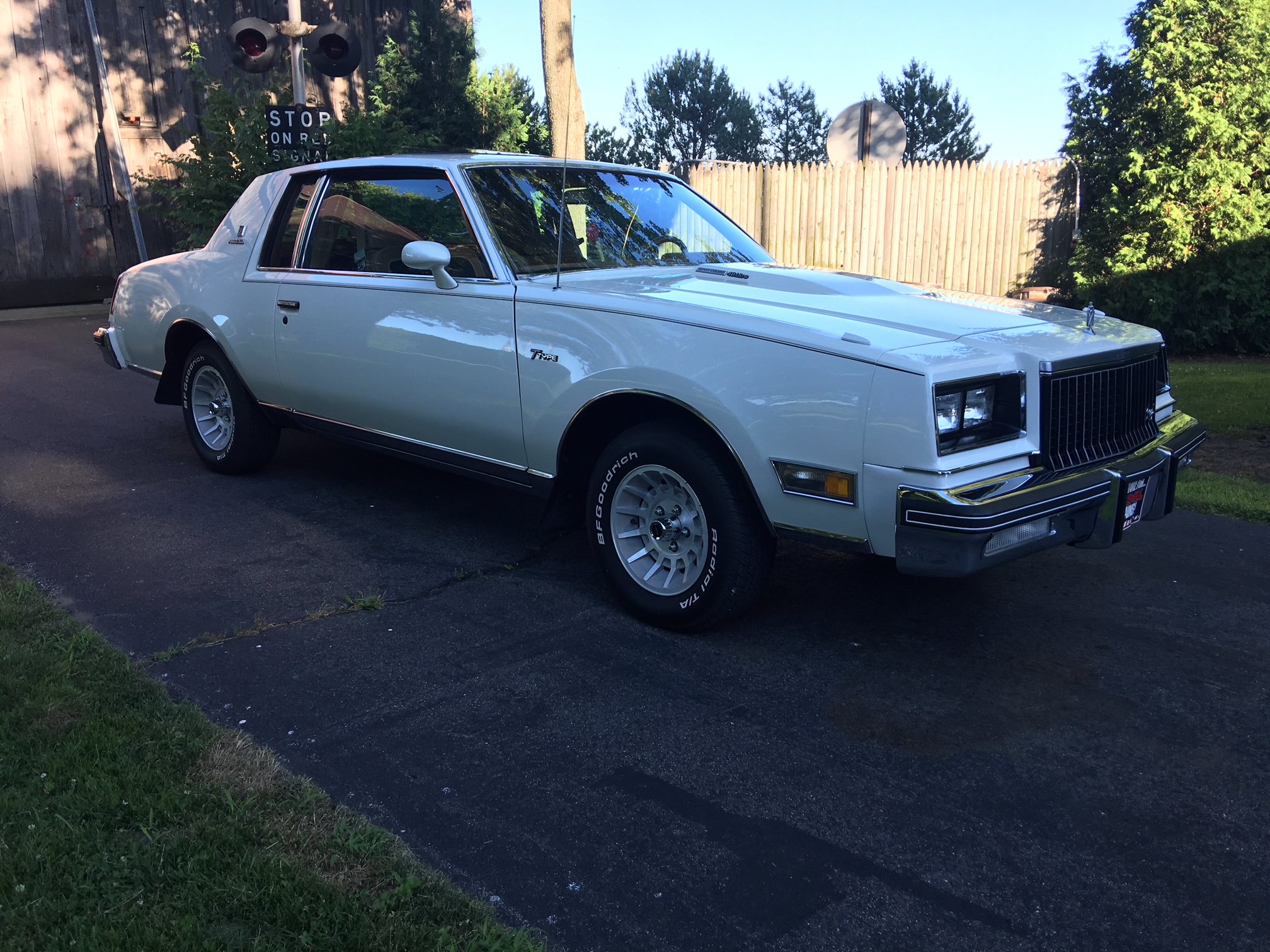 THOUGHT: I found some 15" rims, (see pic's) ... but these old "A" cars used 14" Eagle GT's (& not 15's). Question: (if anyone would happen to know); I understand I'll need a different speedo gear opting to use a 15" tire / Speedo will be off, but AFTER THAT: does anyone know if the larger 15's will come into contact with the frame / upon turning the car (say in a full cramp) ?. The BF Goodrich Tire's pictured have only 58 miles on them, but their VERY "weather checked" / and nearing 20 years old !. I just thought something "different" would be a fun thing to try / thanks on any opinion's / facts. Finding even "Goodyears" seems all but impossible anyway.

Those T Type wheels are 15"x7". The Regal frames from 78-87 are basically the same, so they fit fine. It's the size of the tire you put on the wheels that can cause rubbing.

I thought that might have been the case, but I guess the whole idea's 'moot' / as the Goodyears aren't made anymore anyway ...

(Thx.)
You must log in or register to reply here.