Tranny not locking up.

I am a new member, but I am an original owner of an 87 GN. All original- no mods. The tranny is not locking up. I have been trying to troubleshoot it myself with help of reading form posts. I have measured voltage at tranny and at ALDL and both are good. Brake pedal will drop 12v when pressed. I have checked continuity from tranny to ECM. I have measured resistance between A-D at tranny and have 28ohms. I have tried to shortA-F at ALDLwith a toggle switch and had no change when driving around 60mph. I did try to listen for solenoid to cycle with A-D jumpered KOEO, not able to hear anything.i was wondering if I missed anything before taking to trnny shop. The only thing I dont know is where the oil temp sensor is which needs to be satisfied and how to check. Thanks to anyone in advance.

When a lock up converter is used, it locks at whatever speed is programmed into the chip. This is usually in the range of 40-50 mph. It should unlock whenever one lets off the gas, or touches the brake. It also normally unlocks when one accelerates sharply, or, at wide open throttle. Some chips offer a programming option to input a specific mph at which the converter will lock even at wide open throttle. This usually picks up a little speed, but it is hard on the converter.

In normal operation, the torque converter is locked up when the tan/black wire from the solenoid is grounded by the ecm. By inserting a switch between Terminal F of the ALDL connector and ground, one can manually lock up the torque converter by flipping the switch and completing the circuit to ground.

If the converter refuses to lock up under normal operation, or when forced by a manual switch, one has to determine if the problem is in the circuitry, or in the solenoid, itself.

There are two problems that occur fairly commonly with the TCC circuit.

One is that the solenoid in the transmission stops working and it leaves the converter locked all the time. This is easy to notice as the car will not want to accelerate easily from low speed and you will notice a lot of "drag" when you let off the gas similar to driving a manual transmission car. Also, when it downshifts from third to second to first, you will usually feel a "thud" as it connects with the next lower gear. Finally, the car may idle roughly and not feel right as there is little slip in the converter and the car will want to move more than normally when sitting with your foot on the brake.

The fix for this problem is to remove the pan from the tranny and replace the torque converter lock up solenoid. Some builders suggest using a different solenoid which reportedly is more rugged. Ask your favorite transmission builder for his suggestion.

The second problem that frequently occurs is that the converter does not lock when it is supposed to. Most often this is a problem with the electrical circuit that supplies power to the solenoid in the tranny.

Look at this circuit diagram: If you understand circuit diagrams, you may cut to the chase and check it out without going thru my suggested routine below. 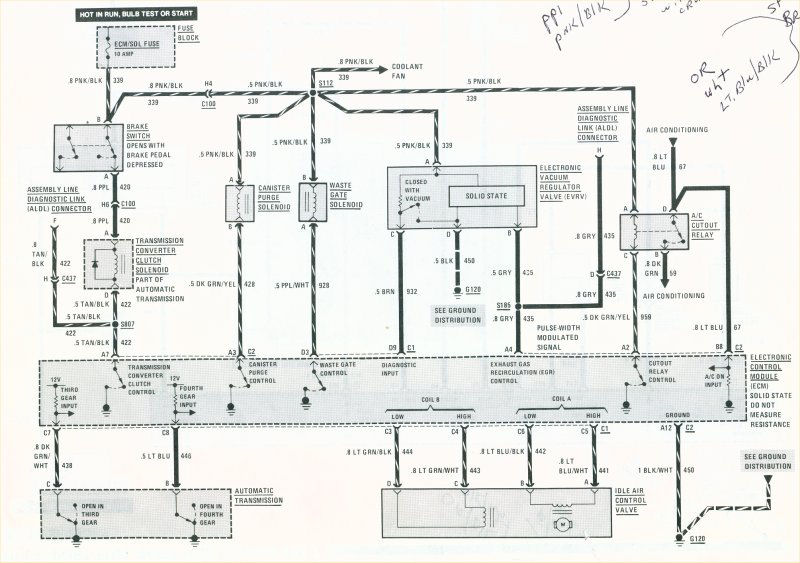 The lock up circuit is on the left side of the above circuit diagram. Power comes from the ECM-SOL fuse in the fuse block and goes to one of the brake switches mounted against the front edge of the brake pedal arm. It comes through the switch and goes to the connector on the side of the transmission under the car. Inside the tranny it goes to the tcc solenoid and then returns back thru the connector to the ECM which controls the lock up and unlock by grounding the circuit.

Troubleshooting-I do it this way if the converter is not locking.

The first thing I normally do is to ground terminal F on the aldl connector while driving the car. If this does not cause the converter to lock, I lift up on the bottom of the brake pedal to see if the converter then locks at about a 50 mph steady cruise. If it does not, I proceed as follows.

This means that the problem is most likely in the TCC solenoid itself as it did not lock when I tried grounding the aldl terminal F. Be sure to look at the tan/black wire to make sure it is not broken. If you ground terminal F, you should be able to verify a ground in the tan/black wire from under the car with your meter. Then go to A7 on the ecm connector and see if that end shows a ground while terminal F is grounded. If there is no problem with the wiring, then I would change the TCC solenoid.

Now, if the purple wire at the tranny plug did not have power when you checked it, then the problem is some place between the fuse block and the plug. Go under the dash to the brake switch (the one with a pink/black and purple wire in the connector). See if the pink/black is hot with the key in the Run position. If it is not, then check the fuse in the fuse block (Ecm-Sol). If you do find power in the pink/black wire going to the connector, then check the purple wire. Is it hot? If not then be sure the switch is adjusted so that the top of the brake pedal lever is full depressing the plunger on the switch back into the switch.

If it is, then it would appear the switch is bad. Sometimes the switch can be fixed by taking it apart and polishing the brass contact inside if it is burned and by rotating the plunger. Check it with your meter before reinstalling to make sure it now has continuity. Reinstall, adjust so that the plunger is fully depressed.

You should now have power at the connector on the tranny on the purple wire. Hopefully the converter will now lock, or you will have to proceed to recheck the rest of the circuit.
B

Hensleyt,
Thanks for the reply. I have tried all of the points listed above. I have tried the switch to manually force the solenoid to lock up tranny and it doesn't, so I guess the last thing to do is check the solenoid. I will update later.
Thanks again.

I dont have any place to try and pull the pan off so I took it to a tranny shop to replace the solenoid. They called me, apparently the magnet was looking like a porcupine and was full of torque convertor debris, so it is going in for a complete rebuild.

was it shifting ok?
automatic trans are not the cleanest thing in town. I would get a second looker.
just poke around in the forms and 200 builds need to be done buy someone besides your local transmission shop

D5 converter that was OE is almost imposable to find. Its time to pump the breaks on this project if its not to late.
lots of people here to help you get it back to OE condition.

hensleyt said:
200 builds need to be done buy someone besides your local transmission shop
Click to expand...

I am afraid it is too late. The tranny was pulled yesterday. It is not being rebuilt where I live. It is being sent away to the city. And to answer your question, yes it shifted very solid. The only issue was no lock up. This is the first time the tranny has been looked at as I am the original owner.

Blaine87 said:
I am afraid it is too late. The tranny was pulled yesterday. It is not being rebuilt where I live. It is being sent away to the city. And to answer your question, yes it shifted very solid. The only issue was no lock up. This is the first time the tranny has been looked at as I am the original owner.
Click to expand...

Should the shop not be REALLY familiar with the GN trans, "too late" may be just the first one.
They screw with the valve body and it's adios.

Hopefully you won't have to have it done & pay twice.

Where are you located?
call and see if it has left yet
if it has to go some where its best it go to someone that dose this on the regular.
Personal I think its OK and it just the lockup solenoid is bad.
hopefully it will be to OE and that leave the valve body alone.
B

Located in Alberta. Got tranny back and installed, still won't lock up. Taking it back in a week for them to look into.
Will find out what was done, only says rebuild torque convertor on work order.

I'm aware you're in Canada so the shipping will be a bear but it is what it is. How much will it cost you to keep repairing yours?

My advise:
A) Keep your car & send the trans to someone who actually knows what they're doing with 2004r's.
B) See if the lock up is turned off in your chip.
C) Get with Scooby on here & see if he has any 2004r shop recommendations. He's the only one I Know that's in Canada. There are others though.
B

Staff member
Without a good amt of equipment, most "trans shops" don't rebuild converters, they exchange them.
Who knows what you have now?
Was the lockup circuitry tested?

Chuck Leeper said:
Without a good amt of equipment, most "trans shops" don't rebuild converters, they exchange them.
Who knows what you have now?
Was the lockup circuitry tested?
Click to expand...

What a difference that made
B

How I do I find out if my chip has the lock up turned off? It is original and used to work. Can it somehow be switched off on its own?
D

Is there not reading material available on rebuilding a 200r4?

I agree with most of the sentiment on here as far as the "average" tranny shop goes. My solution is to do it myself. There is some pretty good documentation on this forum for what hard parts to upgrade on these trans and what mods to make. My feelings are if the tranny shop screws it up then I'm screwed and out more money, whereas if I do it and screw it up at least I know who to blame and hopefully learned some stuff along the way.

Otherwise I would look into sending it to someone in the states that knows what they are doing.

OE chip can not be switched off
Go to YouTube type in Turbo Buick 101
This guy is in Canada. If your lucky he is close enough you can get help. Think you need a real Buick help not some pretend a Buick help
You must log in or register to reply here.