Finally got the engine out, what's recommended?

I've had my GN for 20 years now and have had no real reason to pull the engine until now, the motor is leaking oil from every seal and will need some new seals. The car has around 37 thousand miles on it and has simple bolt on modifications as far as I can tell. It's running 42.5lb lucas injectors, an aftermarket chip(I think it's a Red Armstrong), a K&N cold air kit, the only other additions I can see is an adjustable waste gate actuator and a few gages and a cat delete pipe with cut out. I have added a walbro 340 pump with a Racetronix hot wire kit, an adjustable fuel pressure regulator, a 3 inch downpipe, and a rear seat brace kit. The previous owner set the had the boost set to 19 pounds and I haven't dinked with it.
So while the engine is out what is the recommended items to look over and replace? I have a new bunch of seals including rear main, new 100lb valve springs, a new(20 year old) front timing cover with high volume oil pump as well as new timing chain and sprockets. I'm not looking to build it up to be a race car just would appreciate input on what's normally an issue, so I can get it taken care of before putting the motor back in. I only intend on pulling this engine once as it's gotta be one of the more pain in the but motors to pull. I've pulled dozens of 3.8 engines out of buick regals and rebullt them back in the 80's but those were all carbed low horsepower jobs, these turbo models are a different breed all together.
I suspect this is not the first time parts of this engine have been toyed with. There were a few bolts missing on some of the oil pan, transmission cover and even one of the torque convertor bolts were missing. I've found many bolts for valve covers, sensor brackets and others just finger tight. while others are tighter than they need to be. So either GM built this on a Friday or a Monday and didn't care too much about quality checks, or someone else has had their fingers in the pie.
Anyhow, I could really use the input.

I know I some missed really good guys out there.... Just be very careful in who you take advice from, that's all I'm saying.
M

Mobiltek said:
The previous owner set the had the boost set to 19 pounds and I haven't dinked with it.
Click to expand...

trust me,take the boost down into the 15lb area untill you identify what fuel was used,if its pump turn the boost down to 15lbs.red made a 93 octane chipt and few different race gas chips for different race fuels,the difference was the timing in the chip.i would recommend you get a tt 5.7 chip and clean or upgrade the injectors.get a new pump,and do a nice spring cleaning.
M

Mobiltek said:
someone else has had their fingers in the pie.
Click to expand...

this,time to make sure everything is gone through
M

pop that pan down and look and do a shift kit and trans cooler.i personally would change all the fluids in the car
M

Mobiltek said:
the only other additions I can see is an adjustable waste gate actuator and a few gages and a cat delete pipe with cut out.
Click to expand...

Ditch Reds chip for Erics TT chip. I forgot how much fuel Red puts in his chip. I tech'd one of the new guys car. He installed a Translator with an LT1 MAF, and the idle BLM's were 98.
M

Sounds like some good advice, part of pulling the engine so it can be gone through, I won't be dismantling the crank and pistions, probably pull the heads and go no further in that area unless I see need to but with the low miles she has I probably won't need to. Definitly need a different chip when all is done, as was mentioned, it does run rich. The chip is a 93 street chip and has been running the car well enough for the 20 years I've owned it, but newer is probably better. Was never a huge fan of the 43 Lucas injectors but haven't had any real problems with them either. Is a 50 pound injector too large for a mostly stock application or is there a better size to consider?
I'm not sure a new fuel pump is in the works cause this one was just installed 2 years ago and has only idle time on it and no street time, unless there is something wrong with Walbro pumps. Scanmaster has always been on my bucket list though I'm not familiar with them cause I've not had the opportunity to play with one.
The pan and valve covers are off and nothing looks to be touched in those areas. what failure points should I be looking out for?

You got some great advice from Mr Spool. I'd go with a new chip/injector combo from Eric. Good luck.
M

Did the stock heads come with "cups" around the valve springs on the turbo setups? 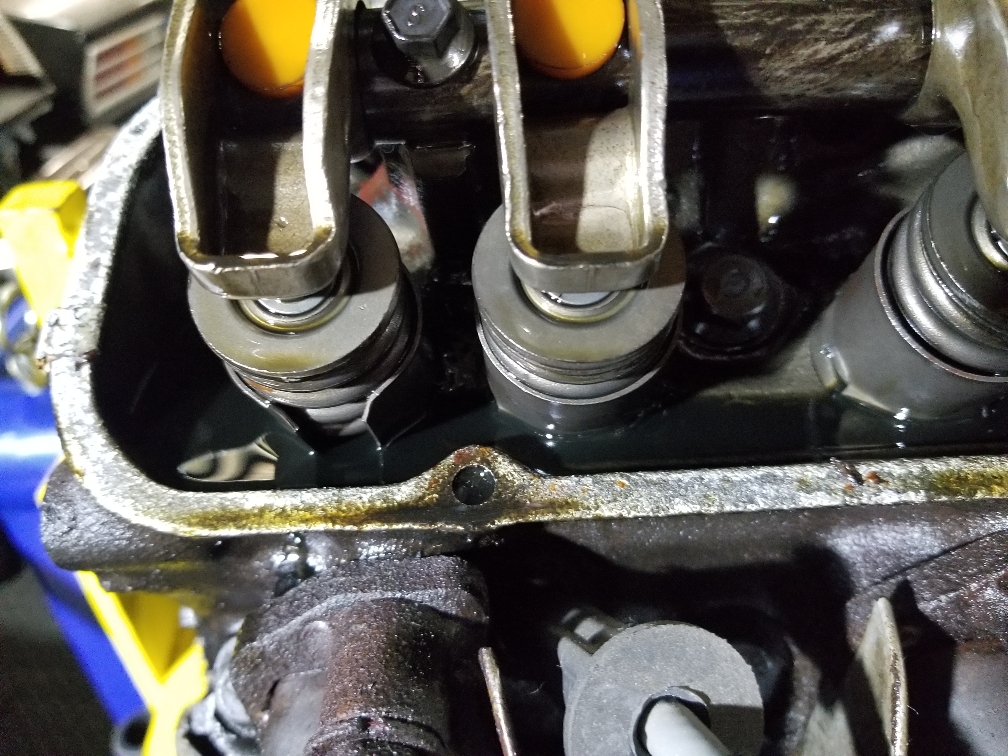 Do a 60# injector/chip flow matched combo from Eric.
Best for our cars from stock up to 700 fwhp ,with great street and idle manners.
might as well do valve springs since your under the covers.
M

Springs are in the works, i will look into the 60lb injectors, good to know their not too big for a stock'ish setup and will definitely get a new chip before this is completed.
I appreciate the input.


Sent from my SM-G950U using Tapatalk

Mobiltek said:
Springs are in the works, i will look into the 60lb injectors, good to know their not too big for a stock'ish setup and will definitely get a new chip before this is completed.
I appreciate the input.


Sent from my SM-G950U using Tapatalk
Click to expand...

Like V6sleeper says, get the combo of chip and injectors from Eric. That way you're sure they are meant to work in harmony and it's more economical in the end.

If that is a factory seal on those head gaskets I would leave that alone. No way to torque it like the factory did.
I'd put a new water pump on it while out and you have the front cover off.
M

I'm hoping that all the seals are factory ones. The only seal I've seen so far that raised a flag is the oil pan seal was rubber. The old 3.8's I pulled from my regals I believe were cork, been so long ago I can't rember for sure. I have a seal kit on the shelf I got from Kirban back 2006 It's cork for the pan but that's not saying much.
Unfortunately for my own piece of mind I think I'm gonna be pulling the heads. I hope I'm not going against good advice by doing so. I just gotta know what I have and that it's done right and only once.
I looked into the 60lb injectors and will have to wait till TT gets them back in stock but it makes great sense to get the chip at the same time. Thanks again for all the input.

Also if the stock nylon timing chain is still in there change it out asap even if it looks mint, it can cause big problems at any power level at any time.
Removing the heads just to take a peak isn't the best idea, id wait till its necessary like blowing something or a head porting job, the factory seal is like cement, hard to duplicate the second time without a new engine build.

TurboBuick.Com Supporter!
If you pull the heads you will need to get head bolts. ARP still makes them. You can go with studs but its overkill for your motor. Stock replacement Felpro 1000s work just fine for head gaskets.

I will bet the block still has a rope rear main seal in it. Replace it with a neoprene one.
Recommend the Right Stuff. Turn the block over. Replace the seal, bolt it in and put in the Right Stuff along the sides until its oozing out of it on all sides. Let sit overnight.

Remflex gaskets for stock headers, turbo and downpipe will help you out a lot. No leaks.

Your experience with NA V6s will kick right back in. There is not a whole lot of differences between the two.

Save all the bolts for that motor. Especially the front cover and mark their placement coming out.
You must log in or register to reply here.