Chuck Leeper said:
Pretty much what a volt/pressure chart should look like.
I'd guess it wouldn't take a lot of effort to scale one and do a compare for possible offset.
Click to expand...

Roger that, thank you for posting, I saved this to my laptop desktop!
O

RichieRocket said:
Good move. If your injectors are high Z then setting up for low Z is going to be an issue. Do some research on that.
Click to expand...

On monday ordered a new 3 map bar from gbodysparts along with a new cat hanger for when I do my exhaust (old rubber ripped off). I was going to get the map sensor from racetronix, but since I needed the cat hanger I figured spend once for shipping instead of twice. Picked up a ACdelco fuel filer as well, then ordered a Viton o ring kit from harbor freight. Also took out my fuel injectors, they looked to be in decent shape no rips or tears on the o rings, after taking off packed in bubble wrap and shipped out to Keith at Injector Experts. More then a few people mentioned that its worth it to get those injectors cleaned and flow benched with new rings and basket since the car has been sitting for 16 years, considering it insurance. I also have a new injector harness with hotwire to install.

Once all parts are received and installed I will try to fire again! Also got a new file for FAST loaded, specifically for 91 chevron fuel.
I was reminded that with the key in the aux on position on the FAST you should be able to see Map values between 95-100kpa. Currently I see a value of 0-1kpa which explains why the car wont run (I think). I also guessing it was only firing initially because I primed the fuel pump and was see 45psi before firing at the fuel rail.

To be continued...
O

Parts came in, just waiting on injectors. I talked to Keith at injector experts today he said they'll be done and shippiled out by tomorrow I should have them by friday.

Considering the 16 years of down time, and the threat of being under boost and one injector goes out, I'm fine with the cost.

Keith has being cleaning and repairing injectors for decades, so why not. The cost is nothing compared to what I have put into it already. Im sure I could have saved $100 diy'ing it, but I'll stick to what I know and I know I don't have a flow bench or ultra sonic cleaner. Just want to be ready for Bates as best I can. I really hoping the new map sensor works, as its the real key to keep the engine running while using FAST Classic. Once the car fires and runs, then new tires are a must and off to the body shop for dent repairs and new body bushings. They dont even make my 295/50/16 bfg's anymore which is a shame as mine are brand new with zero miles on them but are 16 years old, they look beefy on my custom made riken 16x9.5's in the rear. Gonna have to go drag radial 275/45/16s which will be better for traction anyways.

Hope you keep us posted on your runs when you go out and play soon, I'm looking forward to it.
O

Parts came in, just waiting on injectors. I talked to Keith at injector experts today he said they'll be done and shippiled out by tomorrow I should have them by friday.

Update: its been two weeks waiting for the injectors, called keith this morning and he said that he hadn't got to them yet even though when I called two weeks ago he said I was up next and they would be shipped out next day. Frustrating when your whole project of 9 months is held up by someone who isn't honest. All I need to do is install injectors and fire the motor, new MAP is in and new fuel filter is in. Hell my new tires just came in, and I called a mobile installer made appt for this friday.

Thank you for your PM and info!

Update: New Map sensor went in okay, fuel filter went in (some what of a pain but not anything to cry about - just use PB blaster, double wrench method to break loose, and remember on reinstall to 'start' the tank side thread first and engine side just hold with fingers and actually spin the filter to thread, I had a hell of a time starting that thread), installed new hot wired injector harness (not bad one ground one power to back of alternator), new 120lb injectors from Eric @ Turbotweak. Also installed new set of front and rear tires; Toyo Expensa HP 2 in front and Proxes TQ drag radials in back. Installed my custom made IC piping and BOV as well as custom 4" cold air intake with huge k&n filter (took out charcole can and used a 5" hole saw, filter gets nothing but cold air).

Now chasing a no crank issue! It was cranking before and starting but just not staying running. Checking it out this Sunday, starting with purple wire to starter. So damn close I can almost smell it! Battery is charged, and the starter was working fine two weeks ago. But I'll see, got an OG coming to help me out thank the lord.

Also I would NEVER use "Injector Experts" Keith (owner) says one thing and does another; next Wednesday it will be a month still no injectors sent back to me. Over the phone, and on his site, he said 1 day turn around yea fawking right! I should have kept it within the board and just sent them out to Chuck!!!

Trying to make it out for June 5th; once running I'll rush to my buddies house with a welder and install my exhaust. Its a pypes ss dual 3" but since I'm using my own mufflers some welding fabrication is required. Using flowmaster 10 series, center in and center out will make turn downs as well but the system did come with nice tailpipes. I'll have a choice of how loud I'd want to be. Not running a cat, and getting out of state plates.
O

Friday update; unpluged the fuel relay for the hot wire plug it back in and was able to crank it and start it but then I still have the original problem it dies after 5 Seconds. Fuel pressure is good 42 LB oil pressure is good 40ish LB.

Fast unit is connected online with the key on but even with the new map sensor I'm still getting 0 or 1 reading on the kPa.

Any thoughts? I unpluged the orange wire for the computer to let it reset waiting about 10 minutes then I'll try again.

Staff member
Key on.... What's the voltage across the MAP sensor plug?
R

TurboBuick.Com Supporter!
When you have the FAST on and you are plugged into it, you should be looking at the VE map. Hit F4 to bring it up. Once that is up you should see the whole map up, look at the white bubble on the left hand side of the screen, With the key on, that bubble should be about one third of the way up the map from the bottom left hand corner of the map. If its not, the FAST unit is not getting the signal from the MAP sensor. Your car is starting but its not reading the MAP after that to keep it running.

outatime86 said:
I was reminded that with the key in the aux on position on the FAST you should be able to see Map values between 95-100kpa.
Click to expand...

Not familiar with that.
Are you using a Caspers jumper harness from the FAST to the original harness?
O

Both Reggie and Chuck were right as usual!

Another Friday update; talked to an expert and he suggested the fast unit might be still running its map signal off of the maf sensor, which is unplugged not running a maf. First he guided me through the process to test the map sensor plug itself by using a voltmeter and testing the map connector, one of the three sides read 13.5 volts hot, then reversed and checked the other side for ground signal which also read 13.5 volts. He then guided me through the process of attaching a wire to the middle of the 3-prong maf connector and back probing the middle of the map connector. With key on WALA, 100 kPa!! I plugged the old map sensor in and it also read 100 kPa! So my map sensor was never bad to begin with. Now I'm off to shop for a maf to map adapter. If I can't get one soon before the show I could always splice it for now just to get it running. I need to move it because sunday I will be doing body bushings and it can't be up against a wall. Unfortunately back probing the map sensor I was not able to tape it or hold it down so it will require either a splice or an adapter so I can start the car without having an extra set of hands holding the probe, but then I couldn't drive it or repark it, would loose the signal.

At least I know my install on injectors and reassembly went good, no leaks when it fired then died.

Anyone know if someone has the DFI MAP to MAF harness in stock anywhere in socal? I can order from caspers but gotta wait until monday to ship. If anyone happens to have one they are not using I'd gladly buy it off them or trade them a new one once it ships out. I'm itching here to get this beast to run already!

Thank you to Reggie and Chuck for your input!!
O

Was able to see the MAP kPa reading both the main dash (f9) and the dash under the VE table. Simple settings under File then Dashboard Setup.

And no I am not using a harness from caspers to go MAP to MAP but didn't know I needed one. Hell after 16 years I must be loosing it, I could have sworn it was running before without one but maybe I need to lay off the double and triple IPA's! Hard when my favorite local spot has such good beer Hollingshead's Delicatessen Being going to hollingshead for almost 2 decades. Good family owned 3 generations spot.
Last edited by a moderator: May 20, 2022
O

Here is what she looks like, messy but I'll clean her up 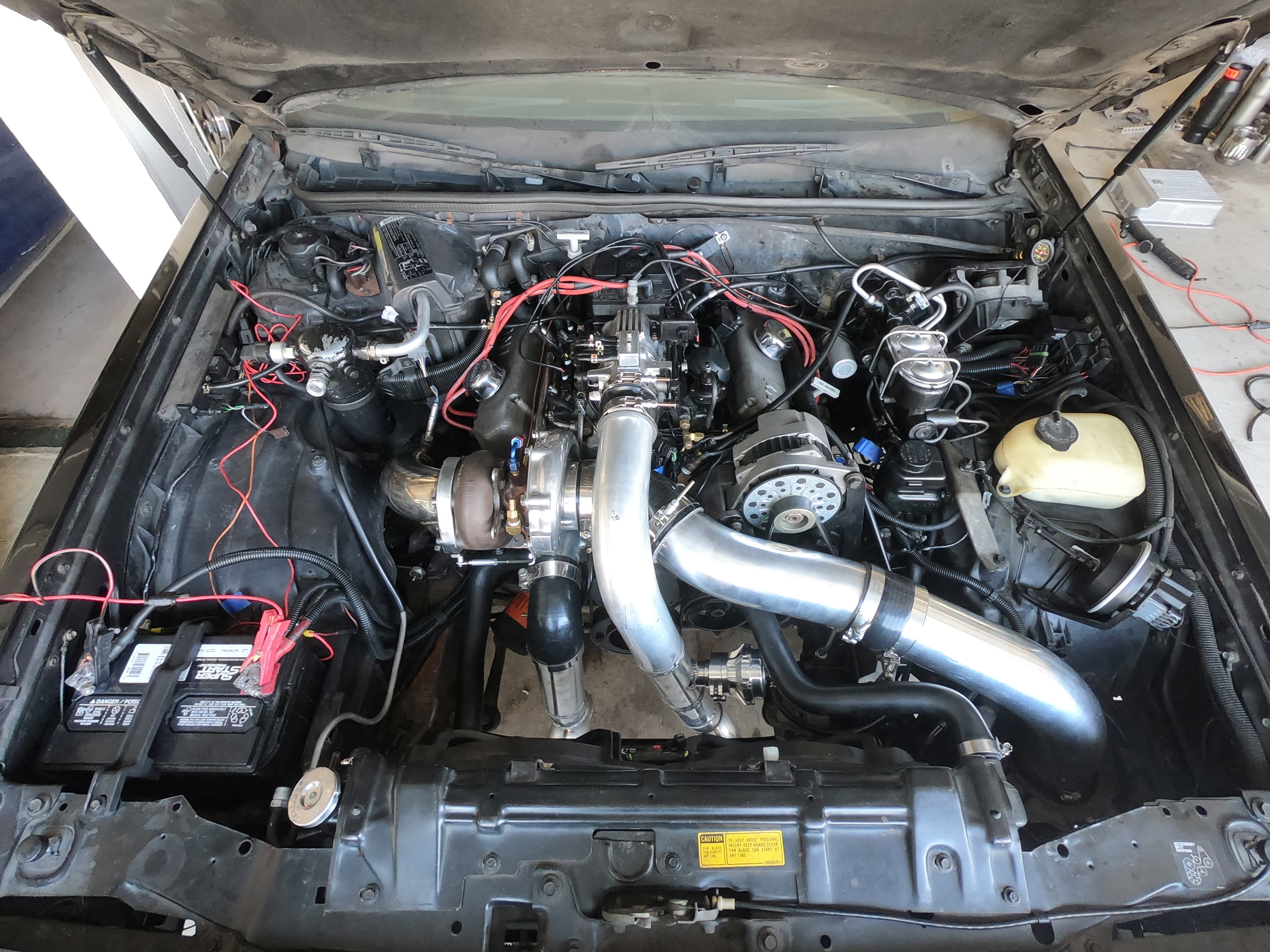 outatime86 said:
maybe I need to lay off the double and triple IPA's!
Click to expand...