I'll be at ZMax Dragway this Thursday, Friday, and Saturday for the SCCA CAM Challenge/Champ tour event, if anybody in the area wants to stop by. Spectating is free. I'm planning on being onsite by 2pm Thursday, and the action starts at 8AM Friday and should conclude early in the afternoon on Saturday.

So NC peeps, if you're bored this weekend, come on out! The CAM field is huge this weekend. Lots of cools stuff to see being thrashed on.

Show them who's BOSS!!!
Sadly, I will only be with you in spirit.

Day one best run, it's not pretty:


There are THREE G-Bodies here. Me, and two really nice Malibus.

I'm sitting in 12th of 17 so far. Tomorrow's best time gets added to todays for the overall time, so if I can not drive like such a putz I could move up a few spots.

Live timing is available at SCCA Solo Live. I'll be running 4th heat tomorrow, which should have me on course ~1pm EDT.

Now that I largely have the videos and electrics figured out, I can get more sophisticated with the data collection.

Since the car ran just fine, nothing really to dig into than the tape. Here's my best run, with in-car:


And here's a fun one, on my last run I was sitting nearly in last place, so the "go faster incrementally" wasn't going to work. I attempted a bonzai, and the car stuck. But I hit a cone, which dropped me from 12th to 15th.

But the difference between run 1 and run 3 was staggering in the second half of the course:


So the story of the weekend is I drove like a weenie. The winter changes have the front end sticking WAY better, and I was being too timid. The other is the split. From the start until the first slalom, my first run was faster. The middle section was pretty even, then from the big sweeper in the back to the finish, I donkey stomped myself. Put the good start onto the better everything else on the last run and I could have broken into the 32s.

Had I run three seconds faster on the first day, and driven like the videos above for all three of my runs on the second day and gotten a fast lap without the cone, I could have placed as high as 9th. But I didn't.

So, there's the lesson. Don't drive like a wuss at a national event where you only get three tries at the course each day.

Next event is in two weeks at Grenada, Mississippi. This next one is a Pro-Solo, which features a drag tree start. I expect hilarity as I try to dial in the launch control on the ECUGN.

I'll have write-up on my blog in the next few days. Though, since nothing broke this weekend, It'll be a short one.

IMHO, "nothing broke" = "win"
You've learned to hustle that beast around the cones very well, I'd bet you'll get this new set-up figured out with a little practice. I never liked the short (30 second sorta time) courses very much, 'cause one miscue cannot be hidden

fwiw, referencing your blog post... here's how I solved the question of loading up the night before departure and keeping everything inside and safe... barn is 44 ft deep. 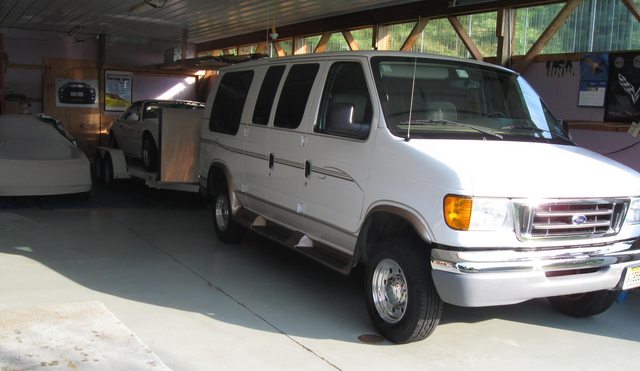 I can get my rig into the back yard and close the gate. The issue is mud. We've gotten an enormous amount of rain here, and until it dries out, there's a good chance I'd get the truck stuck. There will be a large slab of concrete in my future.

^^^ yeah, we had an exceptionally wet 2018, and 2019 has already given us plenty of precipitation as well.
I have my empty trailer in the grass (a "squatter" WE4 taking up space in the barn) and was afraid to put any van wheels off the pavement, Yard drivin' is not recommended.
A large slab sounds like a good idea.
You must log in or register to reply here.

M
4th of July Weekend Events including Heads up racing