Hello gang. Saw this site after a fellow member posted on our RegalGS 3800 forum about GS Nationals. Since that got delayed, I figured my introduction can start by posting here, instead.

Just pulled the engine last month to upgrade the cam to a Stattama/ZZP ST5, after enjoying the INTENSE Stage 3 turbo cam for 10yrs. Also, I was about to put my MP112 supercharged L26 engine in it, but after learning about GS Nationals, I figured I needed to bring my A-Game sticking with a turbo 3800 setup, so I've got a T-67 ball bearing water-cooled T4 turbo and FrozenBoost Air-Water I/C setup ready to drop in as I re-assemble it.

Hopefully the picture collection from the 2009 build loads correctly, or I'll work on hosting it elsewhere to show more details. Pictures and videos of the 2020 setup will be loaded up as I finish it up during the quarantine. 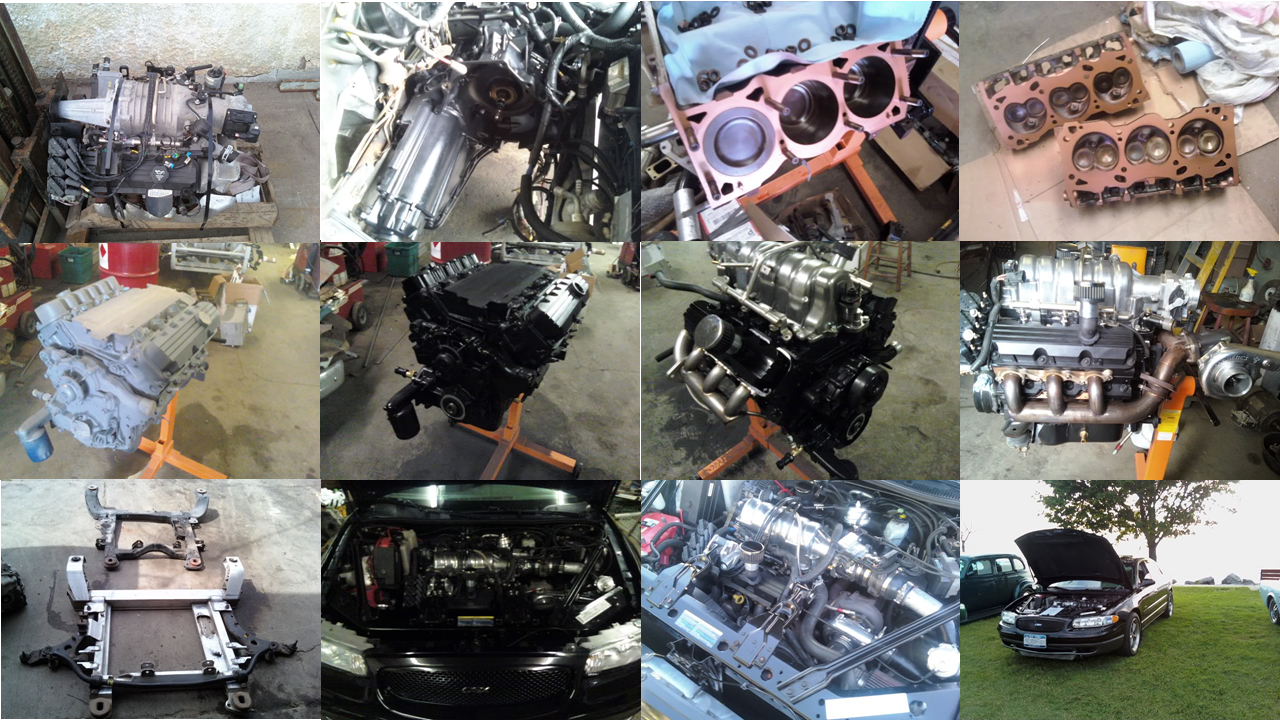 Alright! Welcome to turbobuick.com! Your car looks awesome. Sadly, this forum got pretty jacked up a couple months ago and hasn't quite been the same since. Hopefully it starts to bounce back a little. Speaking of which, I better go update my build thread as well. I look forward to updates!

Some shots as I have been prepping this sideways-mounted beast for more fun: 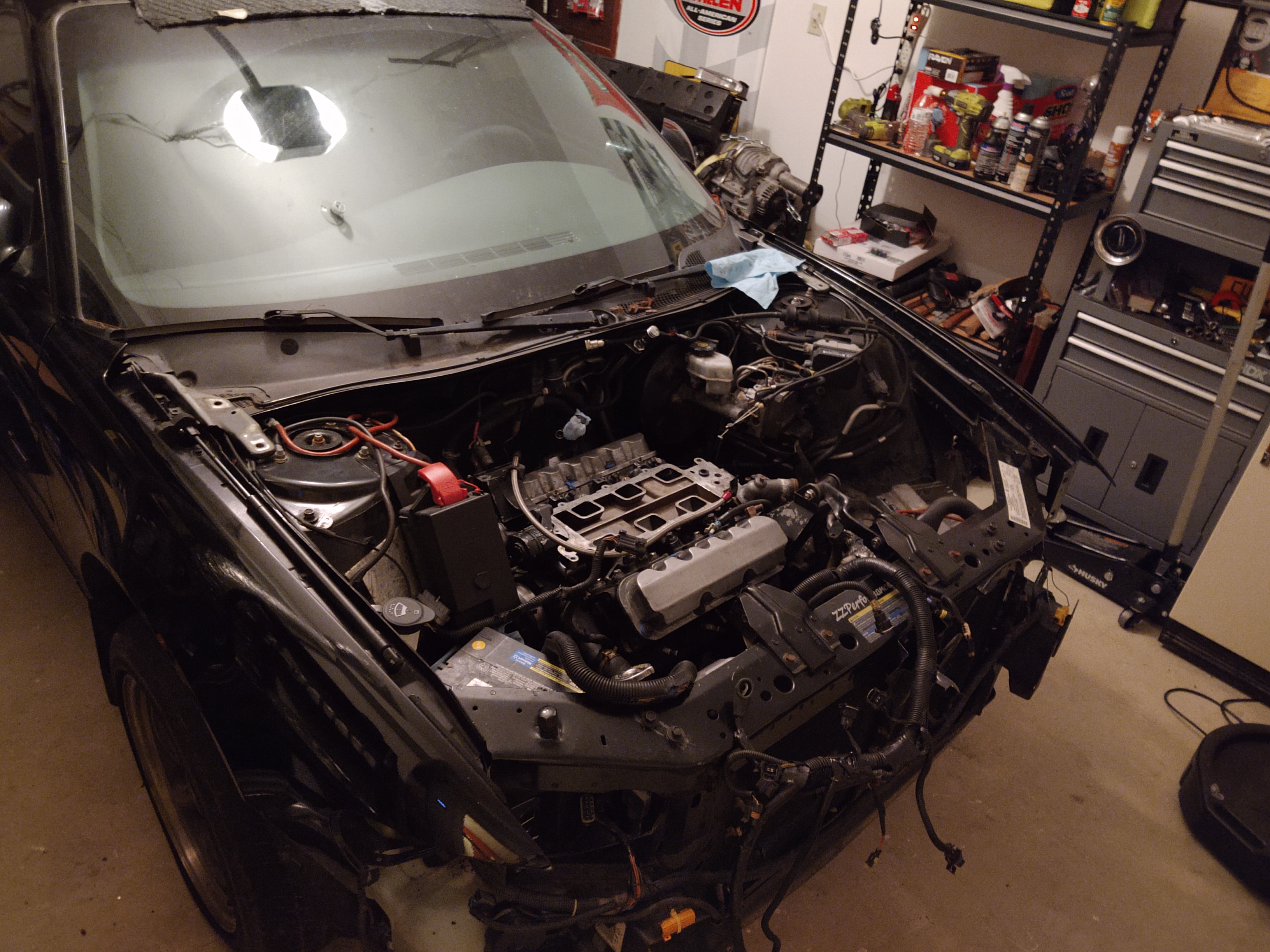 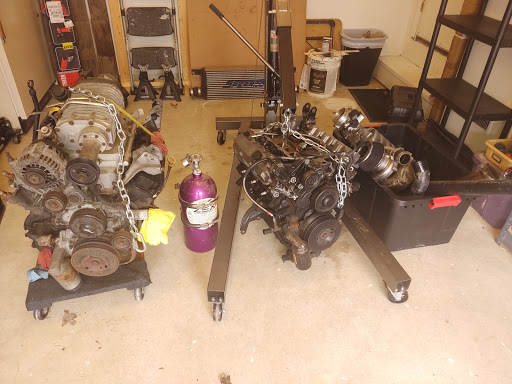 P.S. - preview of the turbo and A2W I/C core that arrived last week

Thanks. Just ordered Morel 6504 lifters and a pushrod checker tool that should arrive tomorrow (most likely need new PR's, then engine can go back together).

All sorts of parts have arrived, and the valvetrain parts will be what initiates the ball rolling the other way.
- '99+ style OEM fans (swapped '98 GTP fans for T67 header setup that almost got installed in 2010, so the better fan setup is going back in)
- Buick Rendezvous/Pontiac Aztek aluminum front bumper support (close to a direct swap, like the Chevy AL engine cradle, and weighs a lot less)
- '08 L26 GP lower intake (some of the less-supported bolts holding the plenum under the MAP cracked on mine)
- GM strut tower braces (from classifieds)
- Dorman square tube trailing arms (bought new for my '98 GTP 6yrs ago (RIP), never installed)
- external trans cooler and -AN fittings (should've done a while back, doing now)
- 85mm LQ4 MAF/IAT (was running LS1, just trying this slightly bigger one with internal temp sensor) 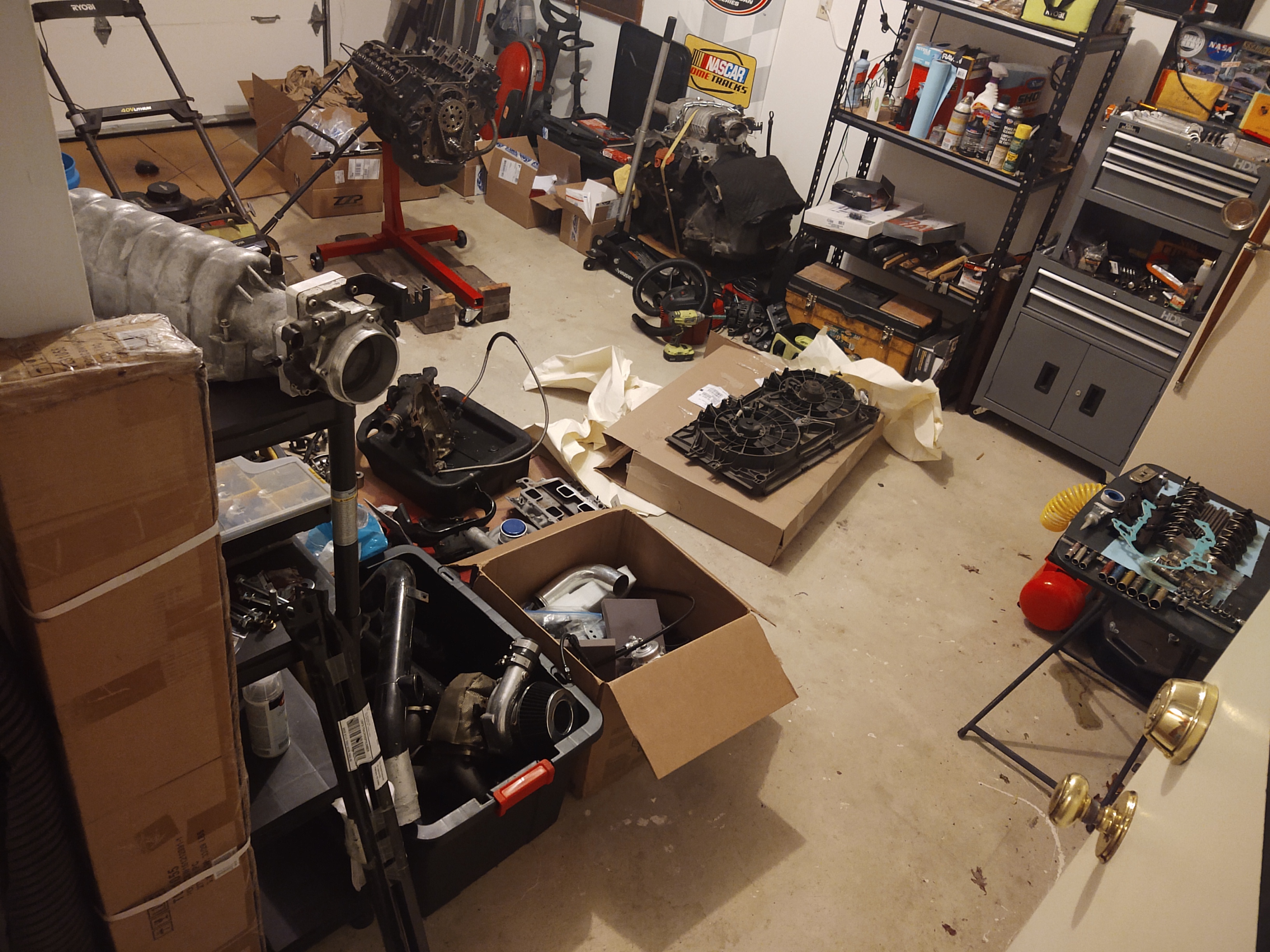 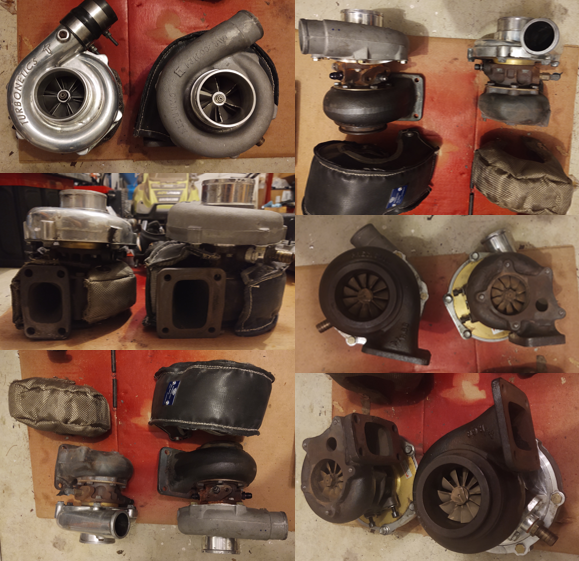 Awesome! Who built your trans? I'd like to rebuild mine but can't justify 4k on a built one. If you're still in the area, Empire isn't that far from me. Do you have any more 1" chains

My dad in Rome is a transmission builder (drag setups down to 7's, dirt/asphalt circle track cars, 4x4 mud trucks, daily drivers)... so after I collected every upgrade part possible, he made sure those went in with all the 4t65e rebuild fixes also common. It was probably $3-4k back in 2009, when some of rarer things were still available (GM Racing chain set & Torsen, Raybestos blue plates). You can still get their performance red clutch packs, though. I have them in my old 12-sec '98 GTP transmission, and they did fine.

I don't have any extra parts, but sometimes they pop up on various Grand Prix/3800 forums or FB?

Got bored and made a short walk-around video, and some gee-whiz assembly work. I'll get better at making them more exciting to watch.

It's been almost 2 months since an update, but I was waiting for my new turbo pipes to be fabricated during the shutdown. They finally arrived ~75 days after ordering, and I put them on today...

Time to start piecing together these and the (too many?) new parts I've collected the past few months. 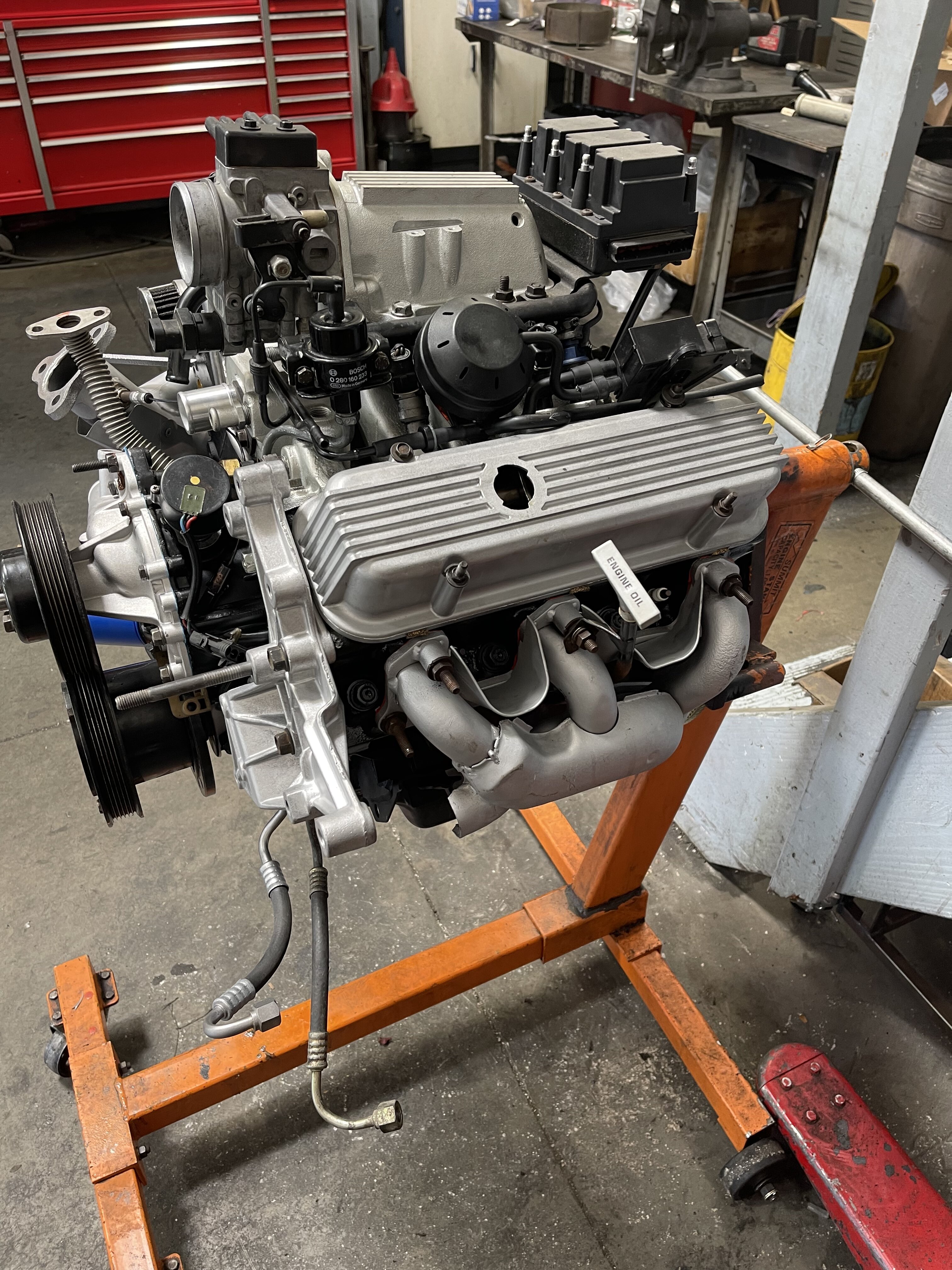 Also got an Australian Holden Commodore 3800 N/A (L36) intake manifold on the way from an eBay purchase. That might take about a month to arrive, so I'll run the L26 setup until all the conversion parts for that swap are ready.

Example images from around the internet: 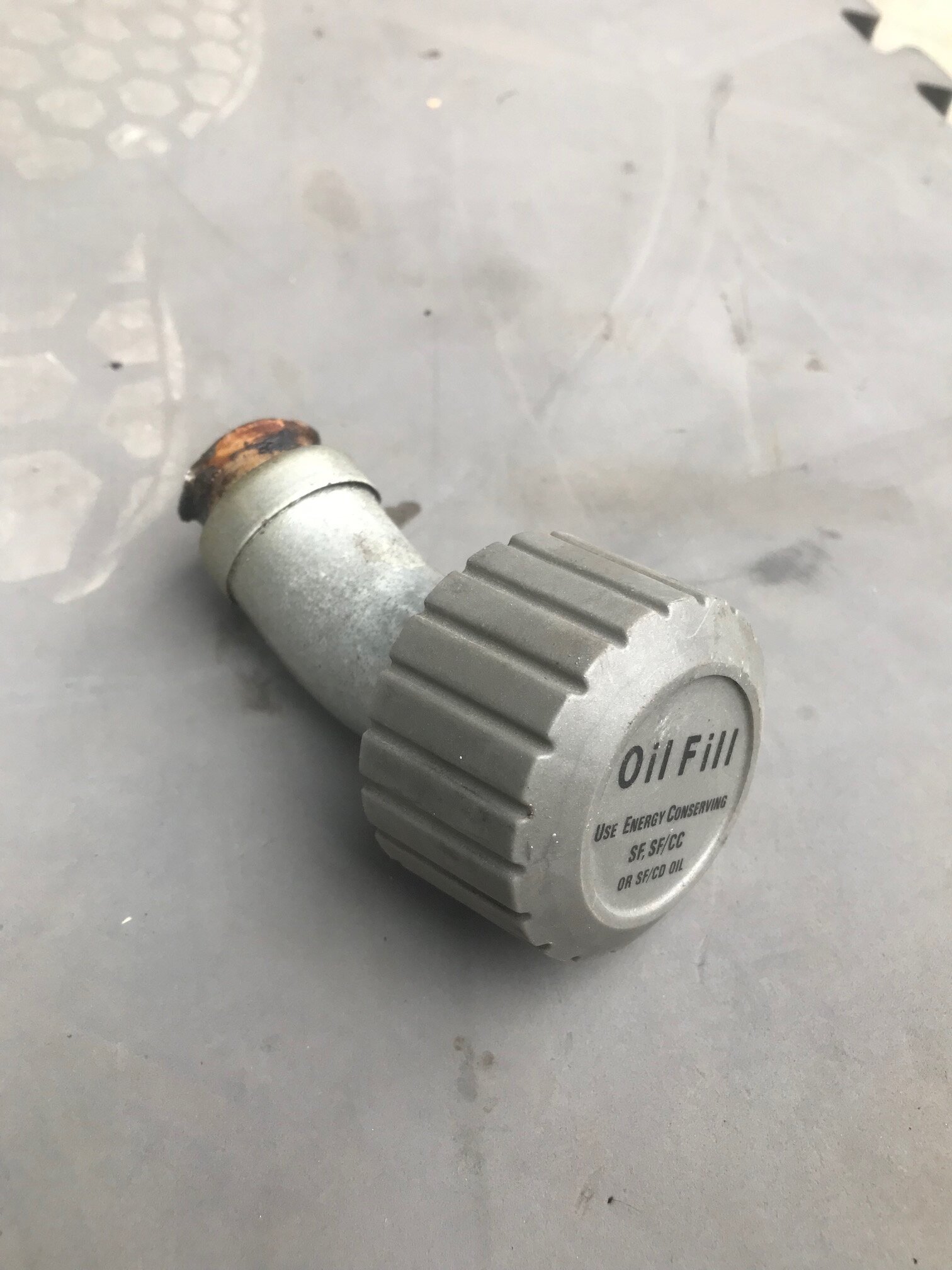 There's also a shop in AUS (ProFlowFab) making a wild custom adaptation of the Holley LS-based Hi-Ram plenum, but they want $1,650 AUD (~$1,150 USD)... Looks great, but that price is not worth a mild appearance, and possible minor performance gain.

That Holly deal looks really neat, but how does it bolt on? The original has is a two piece plenum, but that only looks like 1 piece.

They appear to have welded it all together (not a fan). If I get frisky, I may go for the Holley upper from Summit, and get an adapter to customize for the Holden lower. Total would be ~$500, but maybe that's what next winter is for?

Holley top for Hi-Ram use with carbs/blowers/etc. https://www.summitracing.com/parts/hly-300-217
(or could cut up a Holden plenum and try to add a flange) 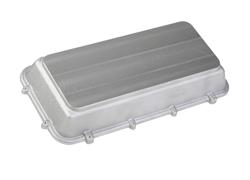 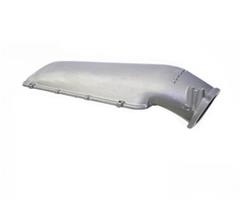 It's been a few weeks, but I've popped into the garage a few times while waiting for the Holden intake to make its way thru Customs, etc. 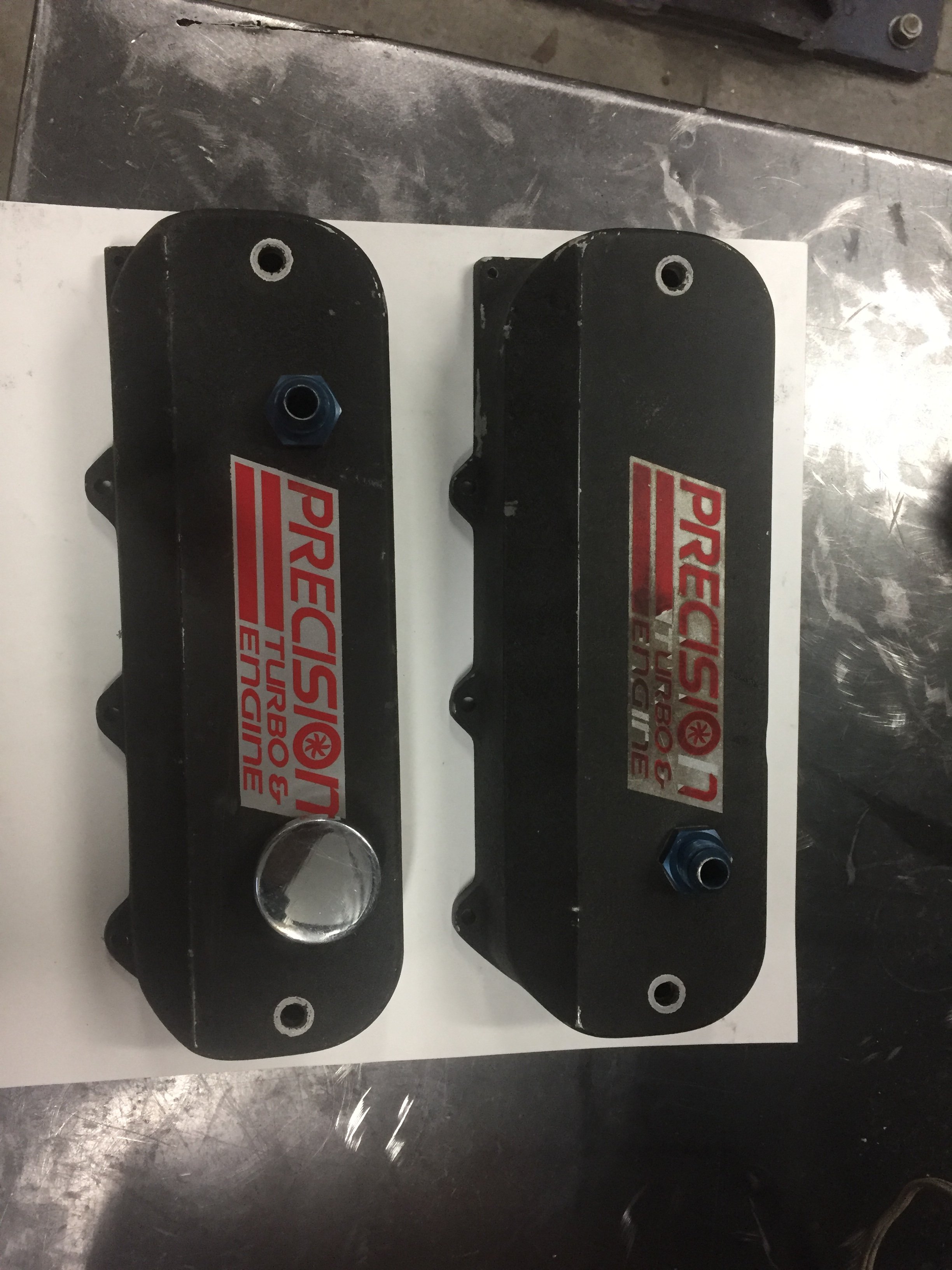 Was able to accomplish the following while waiting:
- new oil pan gasket
- new valve cover gaskets (probable source of leaks causing mess; these ZZP aluminum VC's may be less forgiving to non-OEM gaskets )
- degreased engine bay (mess from above-mentioned leaks)
- hi-temp Krylon sprayed new turbo downpipe and crossover
- started DEI heat wrapping those pipes, and coating (for temps, survival, and performance... any will be worth it) 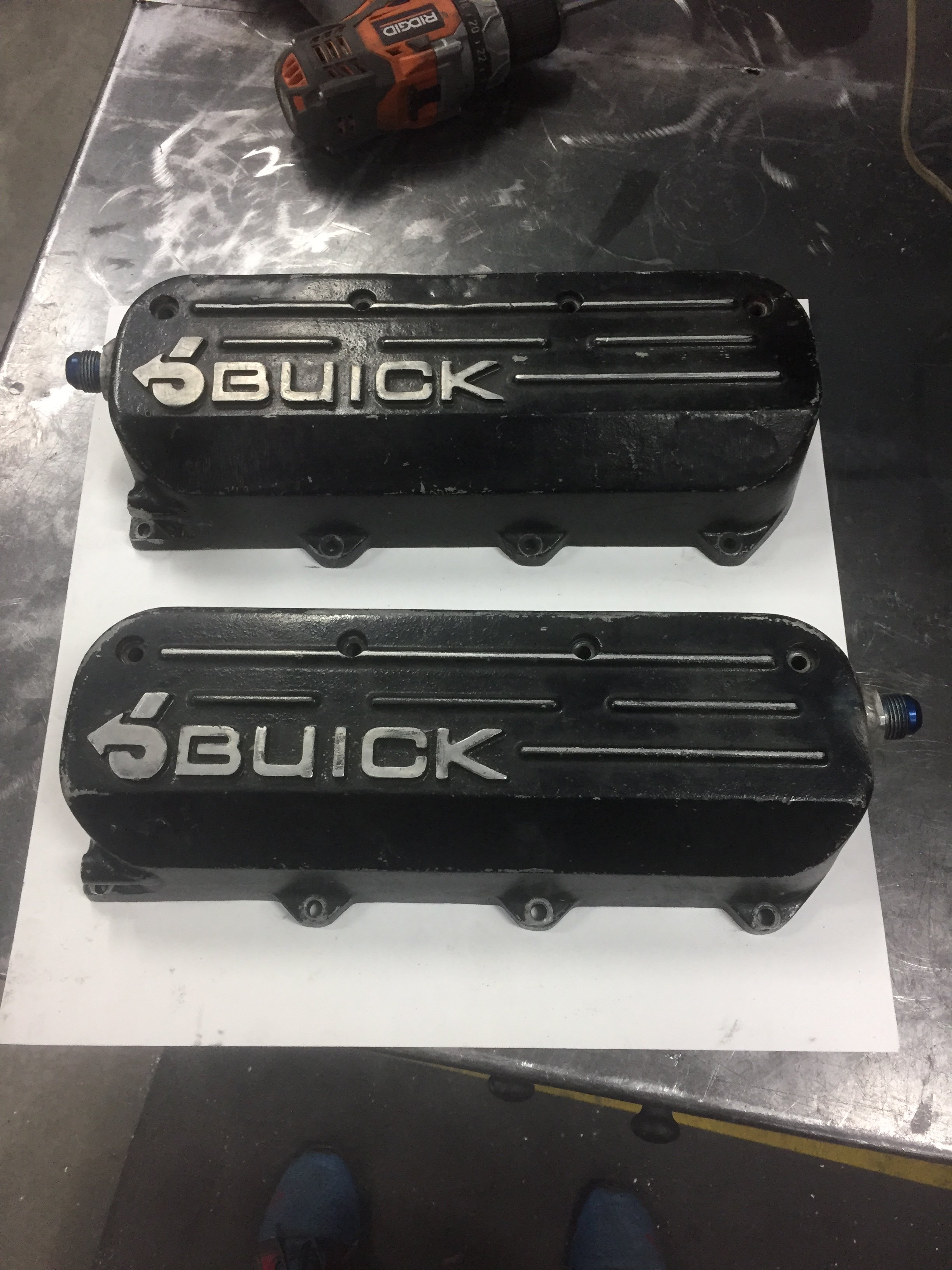 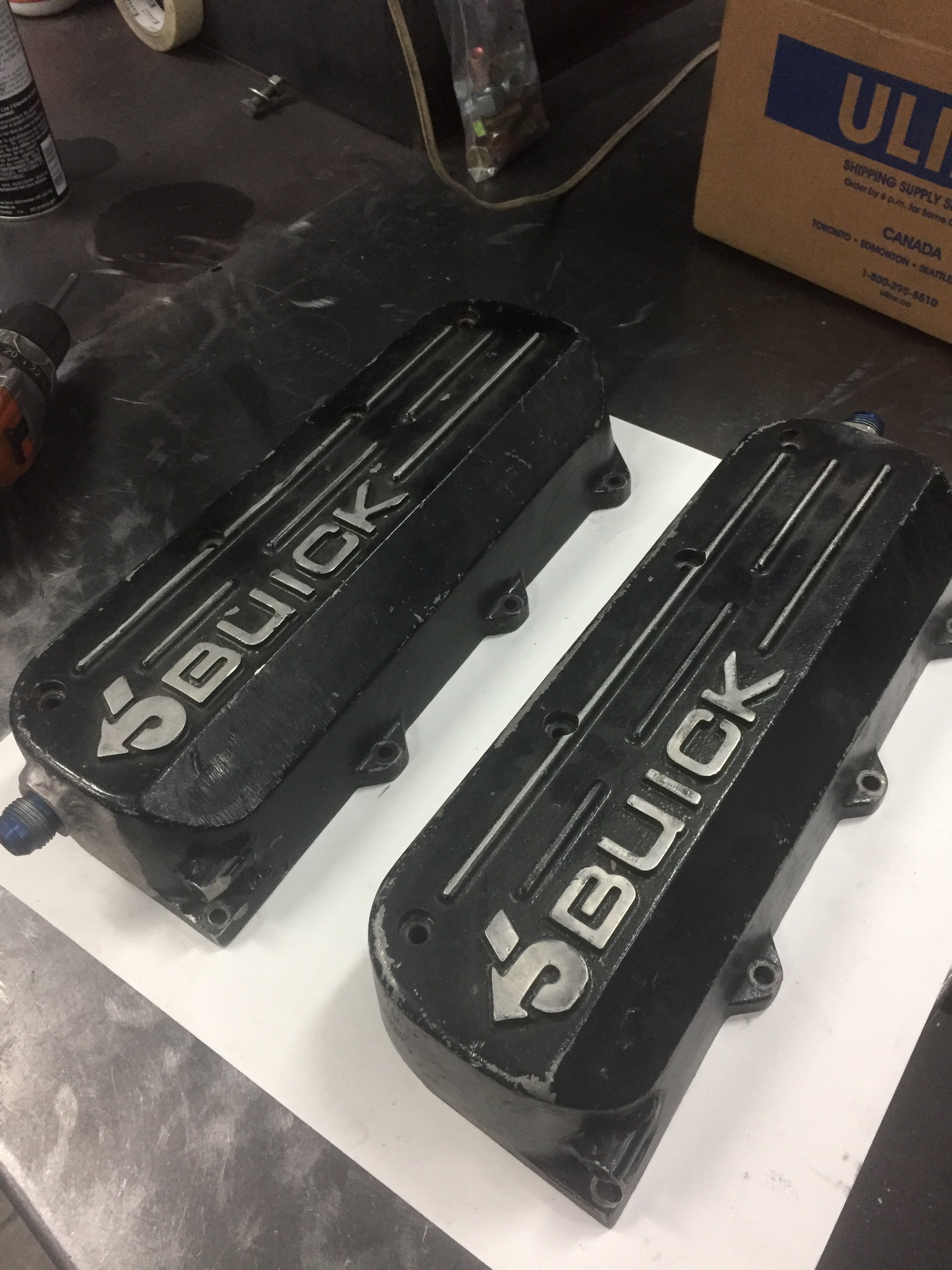 Finally, I was prepping the exhaust manifolds (ZZP power logs) for the Krylon as well, when I discovered this crack, so they're headed to my uncle's machine shop where he'll work his TIG magic to seal it and add 2 support tabs across all 6 primary connections... 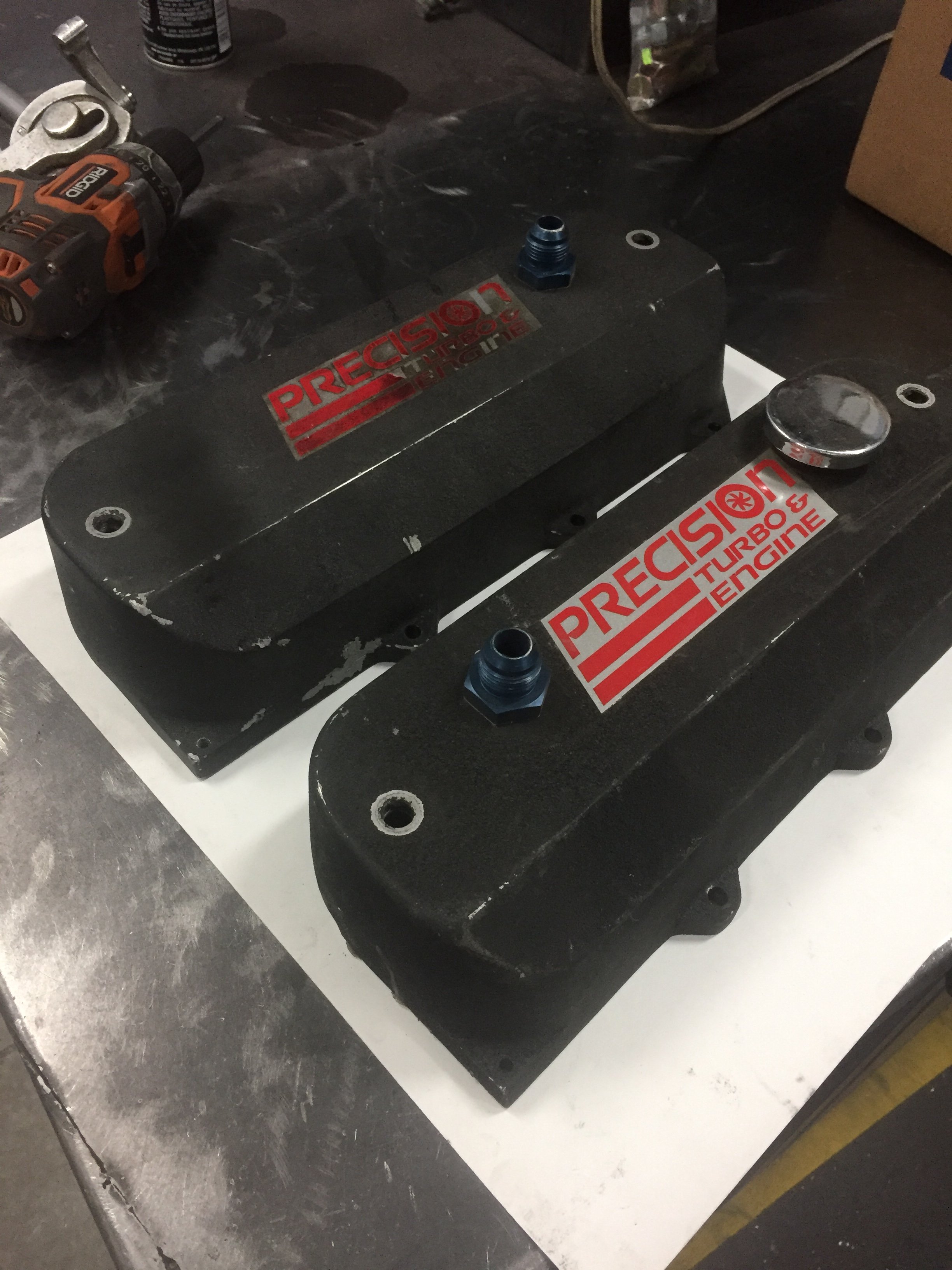 ...was planning on them both looking like this, but they'll wire wheel this one to add the supports. You can also see we added exterior welds to the flange on this one, but the other didn't get it, yet (this was ran for a bit on the supercharged engine in '08-09, and already had cracks). That'll also happen for the other side.
Last edited: Jul 31, 2020

Forgot to mention I'm also building the PCV vacuum system that some boosted LS folks use, with the AIR injection pump from early 2000's GM's on a Hobbs pressure switch trigger. Coupling that with a catch can, and we'll see how it does as I monitor vacuum on the lines.

Also, got a nice 2.5 gallon reservoir for $23 on Amazon (fuel cell, just had a foam chunk and level sender inside). Should give me the volume in my Air-Water Intercooler system as I run it to/from the trunk and standard VW Scirocco radiator with 3/4" reinforced hoses. 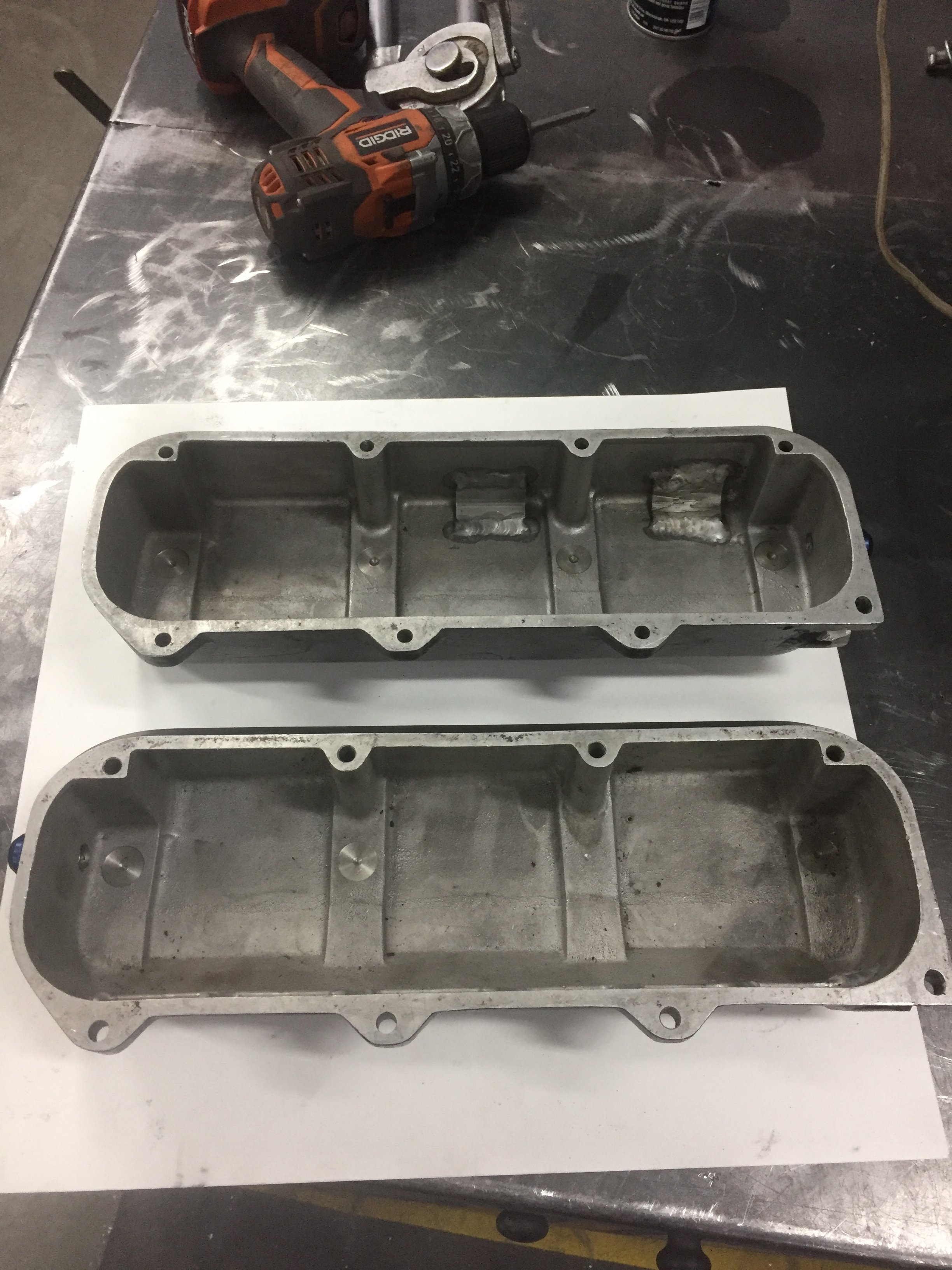 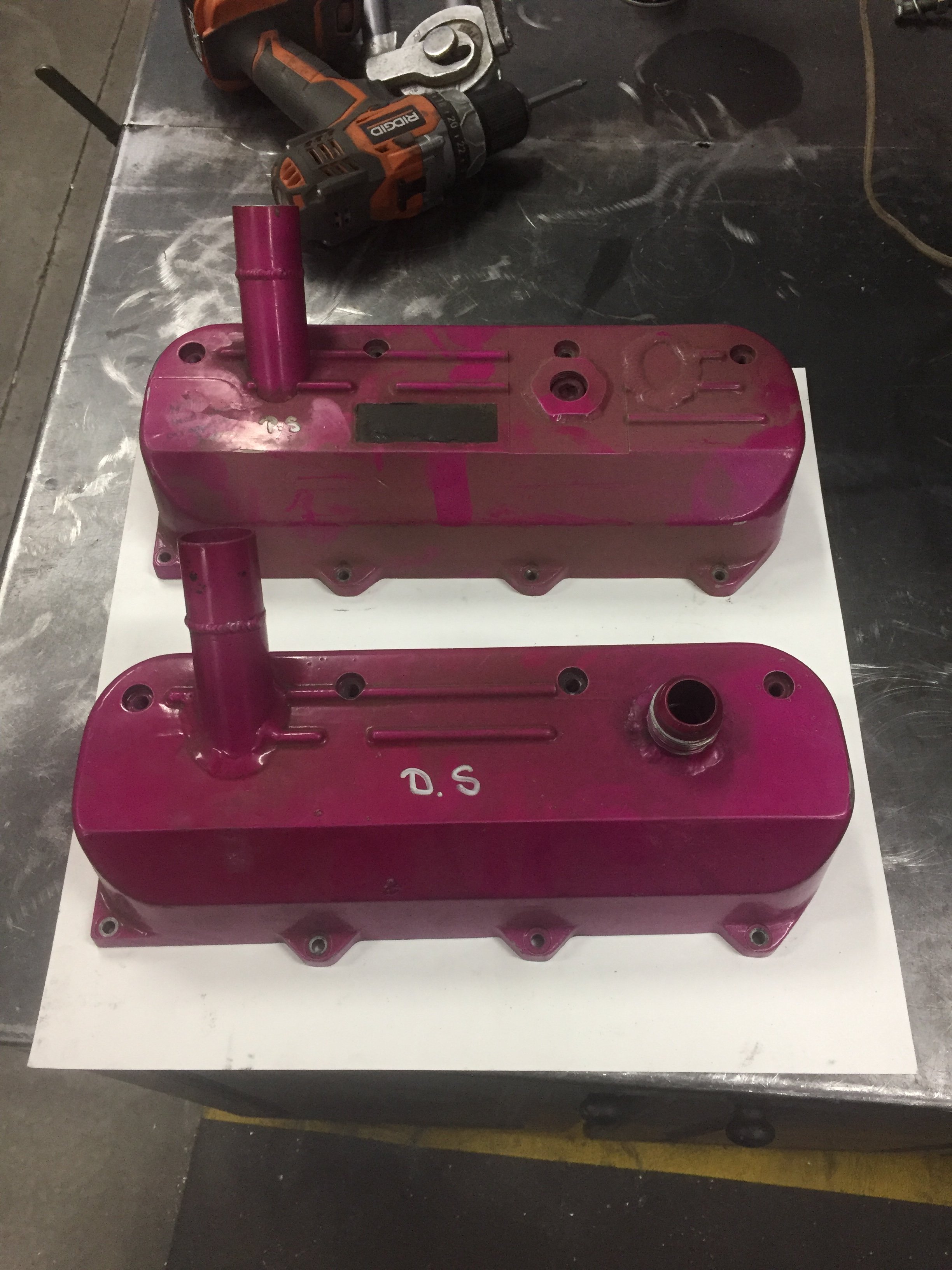 Using this as a build log right now, so I'll continue by adding some pics of this week's items.

Did a 'quick' sanding-polishing on the lid
View attachment

Good stuff. I believe I've seen you on youtube. I have a 2000 Regal GS, still supercharged. It has about every possible upgrade possible. I think the next thing I can do is go to a 2.55 pulley. Currently at a 2.7". The transmission has a stage 2 build, I need to find out what all that entails. Car is pretty fast, but I need to get it painted. Running e85.

MCH86GN said:
Good stuff. I believe I've seen you on youtube. I have a 2000 Regal GS, still supercharged. It has about every possible upgrade possible. I think the next thing I can do is go to a 2.55 pulley. Currently at a 2.7". The transmission has a stage 2 build, I need to find out what all that entails. Car is pretty fast, but I need to get it painted. Running e85.
Click to expand...

Yep, I think a video or 2 is linked above.

I've built a couple all-out S/C 3800 setups, and they're definitely fun. My favorite was my buddy in MN buying a ZZP XPZ race block from their 10sec Novi2k CSC setup, and we installed a polished GenV M90 on it with a Stg 3 I/C. The 2.55 doesn't even stress it, and we cranked timing up pretty good, too. (icebox in the trunk helped, of course, which is why my turbo A2W I/C is getting one)

Hope your setup is doing well. I'll make another update video soon, as I've been busy with other tasks, but am really excited to get this done to enjoy. I've got a bunch of tweaks happening that I need to figure out how to capture in a shorter video.

Been busy all summer with non-fun, non-car life stuff, but I still have a garage full of goodies waiting to adapt/install. New plan is to take it in small bites, and do some videos to document for fun.

First up: Air-to-Water intercooler parts configuration
The radiator was installed, as seen above, so the rest is now set to go in.

Looks pretty here, but will look better in the car, of course.
You must log in or register to reply here.